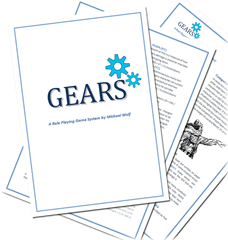 One of the things I always wanted to accomplish was to write a complete roleplaying game system, a set of rules of my own design.

Over the last years I repeatedly made attempts at creating my own game. Creating Thrilling Noir Stories was just one step on the road that finally lead to Gears. Gears is my attempt at creating a rules-light game. The game is currently work in progress and not fully playable, but the basic rules are done and I already shared an early draft versions with some people on the #rpmn IRC channel. They seem to like the game so far, so I believe the time is right to talk about Gears in the open.

What is Gears?
Gears is a generic roleplaying game that should work with almost every genre. The core rules fit on a couple of pages and there will be optional and genre-specific rules that allow GMs to tweak the system to fit their campaign. I also plan to include a couple of sample settings with the final release.
By the way, did I mention that Gears will be free? As with Thrilling Noir Stories I am not out to make a buck, but I want to share my love for roleplaying with others. Gears will be released under a Creative Commons license that allows everyone to share and adapt the game as long as the use is non-commercial.

What Gears is not
Gears is not the “one game to rule them all”, the greatest thing since sliced bread nor revolutionary in any way. I merely tried to combine aspect from games I love to create something new. That said, I hope that Gears might become a viable alternative to other rules-light games out there. I am just not crazy enough to believe that my rules are the pinnacle of game design. 😉

Some of Gears’ features

An Open Design Approach
This post is the first of many to come in which I will give you some details on what I am working on right now. This not only allows my readers to follow Gears’ development but also influence it. Any advice and constructive criticism is highly appreciated.

What are the next steps?
The basic rules are done, combat and healing rules are written and I finished the section on character creation last night. To be fully playable, Gears needs statistics for some weapons and armor, a skill list and at least a couple of sample Talents.
After that I want to work on an effect-based powers system that can easily be used for Magic, Psi, Mad Science gadgets and even Superpowers. Along the way I probably should add some rules for vehicles and vehicle combat before finally starting to flesh out the genre-specific rules.
As soon as I have a playable version, I will make it available here on my blog. If you want to get a sneak peek at the existing rules, feel free to join us in the #rpmn IRC channel. If I am around I can provide you with the latest version of Gears.

NaGa Demon: A look at the layout