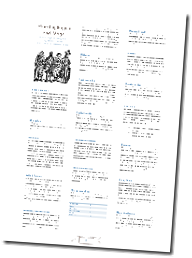 Yesterday around 10pm local time I had an idea for a rule-light fantasy RPG with some old-school feel to it. The result is “Warrior, Rogue & Mage” a four-paged PDF containing complete rules to create and play characters in a fantasy world torn by a civil war.

The game should be playable as it is, but alas I haven’t had the time to do some play testing, so I would like to get some feedback. Does character creation work? Are combats between characters and characters and monsters balanced or way off?

Please share your ideas, criticism and advice in the comments below. You can view the rules here or download the PDF (186k) here.

UPDATE: There are now a revised edition (41-paged PDF) and several supplements available. You can get more information about WR&M here.