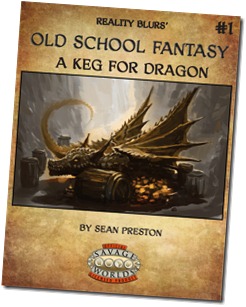 Old School Fantasy #1: “A Keg for Dragon” is the latest adventure from Reality Blurs for Savage Worlds. I am a big fan of Savage Worlds but I never ran any classic fantasy games in it, so I just had to get a copy of that adventure to get some inspiration on how you can run old-school fantasy games using Savage Worlds. The adventure sets you back $5 for the PDF download, so it’s not expensive either.

So, what do you get for $5? “A Keg for Dragon” is a 20-paged PDF containing a light-hearted classic fantasy adventure for Savage Worlds. It does contain some background information on the town of Northpoint and its surroundings. I don’t want to spoil the story here (which has some nice twists) but here’s the blurb on the adventure, directly taken from the official site:

Northpoint is a remote village with no particular claim to fame other than its location in the foothills of the Ridgeline Mountains, home to an ancient dwarven kingdom known for its potent whiskey. Our heroes are traveling there to visit an old friend, an acquaintance, or to follow up on some rumor of your choosing when they are drawn into the village’s dilemma. The Iron Legion, a vicious tribe of imperialistic orcs, has recently begun to threaten the villagers, and have already cut off most travel along the North Road. Their intent is clear – the conquest of Northpoint. For some reason, the Compact of Clipwing has not been honored, and the dragon that protects the village is nowhere to be seen.

Our debut fantasy adventure, A Keg for Dragon is designed to be played in a single evening for a group of 4-6 players with characters of all experience levels, but works well for a starting group or as a one-shot break from your existing campaign. Easily integrated into any fantasy milieu, Old School Fantasy works well with the Fantasy Companion, and introduces no new rules or edges. You bring with it what you will. Ready for fantasy? Remember, Reality Blurs.

What I really like about this adventure is how it’s organized. It starts with a detailed synopsis on the adventure’s plot. Of course this plot will probably get a bit messed up by the player’s actions but it gives you a good overview what may happen. The synopsis is followed by short descriptions of the major places of interest and the cast. All important NPCs are listed with full stats, a short description, a quote and a more detailed background description. There are also GM tips for every major character in the adventure listed.

The rest of the book is called “The Adventure Proper” and is divided up in nine distinct scenes followed-up by the epilogue. Each scene contains an overview of what is supposed to happen, a short description, what the GMs goals are and what the characters’ goals should be. While this may sound a bit railroad-y to some, I think especially the GM and character goals will help novice GMs a lot. The detailed descriptions also give some tips on how the GM could react on certain outcomes.

A Keg for Dragon is definitely not the most complex adventure I’ve seen, but there’s much to like about it. I haven’t run it yet, but I am sure the clear layout and how it’s organized will help the GM a lot. The story consists some interesting twist, but is not too complicated for novice players. And you can’t really argue about the price. $5 for a solid fantasy adventure is definitely a fair price. If you love Savage Worlds and if you are planning to run some fantasy game, you should check this adventure out!

You can get Old School Fantasy #1: “A Keg for Dragon” at the Reality Blur shop or at RPGNow.

One thought on “Review: “A Keg for Dragon””