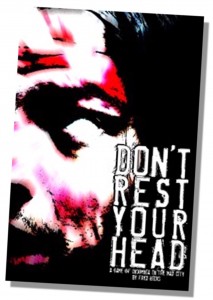 Two weeks ago I got to play a new game. It’s not something I do as often as I would like, so when a friend wanted to try a new RPG I jumped at the opportunity. He gave me the book to read and that was my first contact with Don’t Rest Your Head.

If you don’t know about it, in Don’t Rest Your Head you play an insomniac who has discovered the existence of another world, one that coexists with our own, known as the Mad City, full of terrible and dangerous things. You also possess extraordinary talents and can do some things to the peak of human capacity, and there are other things you can do that are just beyond the realm of mortal men. But you can interact with this world and use your powers as long as you don’t fall asleep so, Don’t Rest Your Head!

As I read it I thought this is a very modern sort of horror rooted on our existential fears. It has a very interesting task resolution mechanic, combining different color dice for different aspects of the character’s nature or conditions. Character creation is through a character questionnaire that serves both to define the character for the player and as a tool for the GM to create stories. All presented in a well written concise little book.

I also discovered it’s very different from other games I play. I never think of myself as old school, but I guess you may say I am. Maybe not in the games I play, but in my style of gaming. Typically there is a GM who presents a story and the players react and interact with the world the GM is creating. As a GM I integrate player feedback and talk with them to tailor the story to their interests and characters, but the roles of the GM and the player are clearly defined. Most of the games I play fall into that category. I rarely play the more cooperative storytelling games where the players and what is traditionally called the GM share control of the story.

While Don’t Rest Your head is presented as a game that can accommodate both styles of play, I think the game shines when you embrace the cooperative model and it truly comes into its own. The dice mechanic, where you need to roll low for successes but the dice showing the higher number determines what aspect influences the outcome is innovative and despite my initial fears, pretty easy to remember. All the important rules fit in one page and I think this is a plus for ANY game.

After giving it a good read I met with the GM and a group of fellow players. The GM originally wanted to try the game with three players, preferably experienced role players who could understand the advanced nature of the game, but since we were playing at a gathering of gamers we ended up with six players, three of them in their teens, one of them playing for the first time. The other players were a guy who had not played any RPG for five years and me.

The first thing we did was sit down to fill out our character sheets. The GM was interested in all of us having some connection so we discussed our character ideas and found ways for all of the characters to be connected. I knew that the GM was concerned about the younger players, but they grasped the idea of the game pretty quickly and were soon narrating the framing scenes that introduced their characters. The new player took to the game easily and soon was actively participating in creating the story.  I think I was the one with the most trouble with telling my story I was waiting for the GM to tell me what was happening.

The players were soon fully immersed in the story and we were introduced to the world of the Mad City. The dice mechanic took some getting used to, but the game has an excellent index (always a big plus in my book) that allowed us to look up any rules questions with ease. The only bad part of the game was that we had to end it so soon. We played for a couple of hours and then the activity was over and so ended our brief foray into the Mad City and Don’t Rest Your Head. 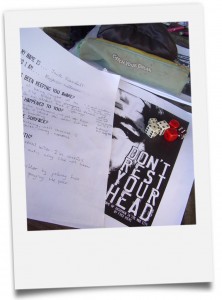 On retrospect I think the game worked very well, it was easy to pick up, with an intuitive dice mechanic, and despite initial concerns the game ran great with young and inexperienced players (not that they were one and the same). I’m not sure I like everything in the game, I don’t think all the elements in the Mad City are appropriately horrific, some of the antagonists are horrible to imagine, others seems silly to me, but I guess this is a matter of taste and something easily changed by a GM. I think the Mad City as a setting can be tailored to the group’s idea of horror with ease. When I was talking with the GM before the game he thought this might be a good pick up game for casual play, but after playing it I think it would be a great game to run a horror campaign with.

If you are curious there is some great material in the Evil Hat Productions website, blank character sheets, a sample character, the first nine pages of the book, if you are unsure about it, go check it out, I’m sure you’ll be hooked.

Others have reviewed the game, and even if I came late to the party, the game deserves the praises it has received, let me add my voice to the chorus, Don’t Rest Your Head is an excellent modern horror game with lots of potential. You made a convert out of this old school guy. Thank you to the Evil Hat Productions for putting out this gem of a product!

PS: I’d like to thank my friend Edwin for introducing me to the game and my fellow players, we had a blast!