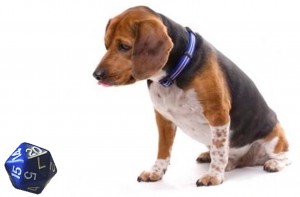 Hello all… I’ve been silent for a couple of days since I spent it from Spectrum Canine Dog Training, actually more than a couple; thirteen days to be exact. Sorry for my silence, real life just would not relent. I still have the last of my Lovecraftian posts to complete, but I’m back with a shorter post, and I’ll promise I’ll hammer out the last Lovecraftian posts soon!

The older I get the more I realize I’m set on my ways. There are things I do that when something disrupts them it annoys me to no end. In an effort to fight stagnation I’m trying break my routines, do things differently and shake things up in my life. Gaming is no exception!

Over this past few months I’ve been exposed to many new gaming friends, through the Puerto Rico Role Players Facebook Group, Twitter and this wonderful blog, and from everyone I learn something new.  Some years ago I would not consider playing games of a more collaborative nature between the Game Master and Players, help organize large gathering of gamers or written my ideas about gaming and shared them with the world. All things I’m doing, and I’ve decided my next game will be more in the vein of modern storytelling games. I’m really itching to run a game using FATE.

But in the more immediate reality of my weekly gaming session I recently tried out something new. When you are a DM/GM on a weekly game for a prolonged period of time it’s easy to fall into a rut, or begin repeating yourself. I’m a big advocate on player feedback, and always end my session asking my players:

It may sound simple but those are some tough questions, especially when someone tells you they did NOT like the session and shoot off a list of things. I think it’s best to discuss something like this before hand and establish some ground rules like: avoid personal attacks, be constructive), etc.

My current campaign has been ruining for close to a year now and due to character death and some player changes, I believed it may be due for some refocusing, repurposing, letting go of old plots and trying out some new things. Of course I’m working from my point of view, so I figured I need to try something different. A player questionnaire!

I tried this before for a Star Wars campaigns some years ago, but it was at the beginning of a campaign, no tin the midst of an ongoing game. I was asking them to pick apart the game I’ve dedicated the better part of a year to, so you can imagine that if you need to strengthen your resolve and not take it personally for the simple question at the end of every session, it would be that much harder for a campaign questionnaire.

So far four of my six players have answered the questionnaire and the results have been revealing.  What they expect, where they see their characters, what they like and dislike. Some have been pretty blunt and some details might have shocked me, but I consider this exercise a success and it already has given me ideas I used as recently as last night’s session.

I realize there are a lot of gaming questionnaires out there, but I’ll share a version of my questionnaire with you. I’ve cleaned up specific references to my campaign so you may change it and use it to your own needs. I’ll just let you know this was for a year long fantasy campaign in which characters are all in the 7th to 8th level range. I hope it can be of some use…

Let me know what you think, or what sort of questionnaires you use for your own games. Happy gaming!