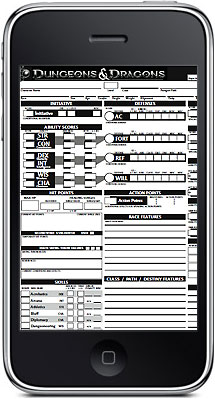 I know that Dungeons & Dragons is a paper and pencil game – that is one of the things I love most about it.  I can get a gaming session rolling with just the bare bones basics if need be.  However, I know many gamers out there always travel with an iPhone or an iPad.

Wizards of the Coast does offer a subscription service called Dungeons & Dragons Insider that gives its subscribers access to a wide range of tools that they can install on their Windows machines or use from their web browser, making all aspects of Dungeons & Dragons easier for gamers. I have a Dungeons & Dragons Insider subscription for the Dungeon Magazines and the Dragon Magazines.  These are amazing and full of great advice as well as adventures you can use.  I personally don’t think Wizards of the Coast is charging enough for them.

Now, I don’t want to turn this into an operating system holy war over which is better, Windows or Macintosh. (Macintosh is clearly better.)  Simple math tells us that there are more Windows machines out in the world than machines running the Macintosh OS, so I don’t fault Wizards of the Coast for focusing on the Windows platform.  Truth be told, I have tried all of these programs on friend’s computers and they are all good and very helpful. Never the less, with all the iPhones in the world I find it shocking that we the players of Dungeons & Dragons don’t have any official iPhone apps.  I am not asking for earth shattering apps, but it seems like Wizards of the Coast could easily put together a couple of the more basic things that Dungeons & Dragons gamers want.

Food at the table (or other designated gaming area) what to do… Ask the readers!