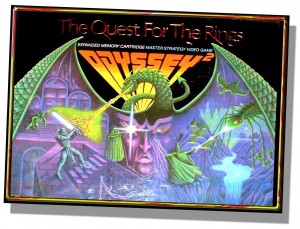 Well today has certainly been a day for nostalgia! I loved console games in the late 80s early 90s and some of them were of great influence in our gaming.  A friend ran a campaign heavily inspire by both the original Zelda and Phatasy Star games. And while I rarely play console or computer games now, I fondly remember the games of the past.

Today while watching a video on how Starcraft would have looked if it was made in 1984 (thank you Michael for the link!), I commented “That would be a game I would have played”, and immediately remembered the first console RPG game I ever played, Quest for the Rings in the Magnavox Odyssey 2! Here it is in all its pixelated glory:

I received the console and the game as a gift in 1981 and while I never quiet understood the game I remember spending hours examining the art on the box, the components, and above all the map. Long after the console had broken down and the game no longer existed, I kept the map, I carried it around with me, making up stories set in the places depicted there.

This all was before I even knew what role-playing games were. I remember using the map while playing with my D&D action figures, of which I wrote about on a previous post. Sadly I no longer have the map; I can’t recall what happened to it. But looking at the map online I just realized how certain parts of my homebrewed gaming world feel inspired by the map’s contours and topography. 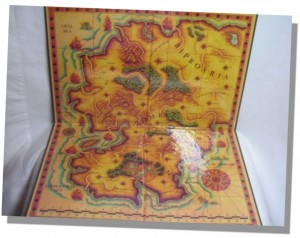 While I usually list literary pieces, such as Tolkien, Dragonlance and The Odyssey, among the formative influences on my gaming style, I must admit that games such as Quest for the Rings and board games like Dark Tower were equally influential.

What influenced your early gaming? Inquiring minds what to know!

PS – In case you want to know, this is the Starcraft if it had been made in 1984 video that inspired this post:

And the TV commercial for the Quest for the Rings game: