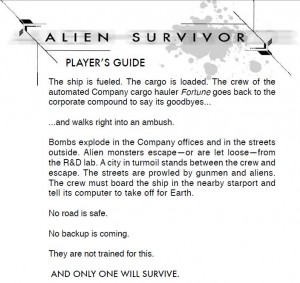 That is the most convoluted title to any of my posts… But I digress!

When we last left out intrepid heroes (i.e. my players) we were about to play Alien Survivor. Let me give you a little background, just in case you didn’t read part one.

After having played Lady Blackbird at the Puerto Rico Role Players Geeknic II I decided that I wanted to run this type of game for my regular group; simple rules, heavy on the role-playing and offering players a degree of control on the adventure sometimes missing from more “traditional” games. When two of my players were out of the country and we had decided to play a one-shot adventure I found the perfect opportunity.

We had discussed what to play, originally two members of the group had offered to run one-shot games, but eventually said they could not manage. I then considered running a short Savage Worlds game, but real life really made it impossible for me to set everything up, even with the great one sheet adventures they have on the Pinnacle website.

So with the time crunch Alien Survivor was the perfect solution. It is a great bare bones game infused with the flavor of sci-fi survival horror in the vein of Alien, Pitch Black and Event Horizon. It takes the Lady Blackbird rules and makes adjustments that fit the feel of the game, adding a health (damage) mechanic for combat that fits the other addition to the game very well, only one character can survive! The characters face challenges and struggle to survive, but the ultimate goal of the game is for one, and only one character to survive. The idea is for the players to work together and influence who is the ultimate survivor. I loved it, and after readying it, began to prep for the game.

I printed out copies of the characters for the players and decided to go with the optional idea that each character has a secret so I created little handouts for each character. I even decided to choose images for each character. On hindsight this might have been my first mistake, even before the game began. But I know my players and feared that if I asked the basic question “What does your character look like?”, it might have unleashed an endless discussion on little details and attempts at modifying the characters and I wanted to avoid that and get right down to playing, so I passed out a handout and said, this is how the characters looks like, this is what they do, who do you want to play? (You can see that handout in this post.) 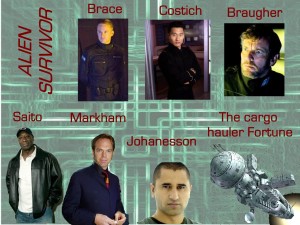 Players selected their characters and we began to play. I knew one of them was not thrilled, he doesn’t like one-shot adventures, and games with more player control and less rule structure are NOT his cup of tea. The players have gamed with me for a long time, the most senior one for 17 years and the newest member for about 3 years. We are used to playing D&D (2nd, 3rd and 4th edition), Star Wars Saga System, Mutants & Masterminds and currently Pathfinder so this type of game was outside their comfort zone. At least one quickly understood how to use traits and tags to create the story, the others three had to struggle with it, and I think one never really gave it a chance.

I also believe I was not totally effective in creating the right expectations, no one really embraced the “only one can survive” mentality. The concept of the game is that the players are the crew of a space ship ready to take off but trapped in a planet caught in a colonist rebellion and under attack by hideous alien creatures released from the corporation’s secret R&D lab. The players try to make their way to the ship facing angry militia, aliens and other challenges along the way.

The players began their trek across the dangerous settlements. The two NPCs were quickly dispatched and the players faced humans, aliens, barricades, traps and little by little they began to get the hang of it. I even had something happen that had only happened twice before in my LONG gaming experience. One of the players decided his character stopped for a bathroom break! (The story about the other two times is a matter for another post…)

The bathroom break led to the group splitting up and when the lone crewmember managed to communicate with the ground crew on the landing pad he told them the other characters were compromised and ordered the ground crew to stop them at all costs. On the way players eventually figured how to use tags and traits and the dice were in their favor, allowing them to mow down the opposition, human and alien alike. Eventually all crew members reached the ship and that’s where things got interesting. One player, the most wounded one, tried to make his way to the bridge during take off and died due to the strain, and another player sacrificed himself to dump the cryogenic tube containing his wife and hidden alien experiments. 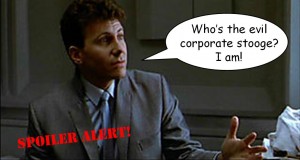 Two players survived and went into cryogenic sleep to make their way back to Earth. The prologue of the game was a rescue crew extracting one of the players and him seeing that the other cryogenic chamber had failed, he was the last survivor! While recovering on a corporation hospital, and taking a cue from the classic Aliens movie, a guy that looked like Paul Reiser comes in and informs the survivor that the ship was lost for hundreds of years and that it’s auspicious that they found him because a new colony ship just landed on the planet they left behind. The end!

At the end of the night I believe we had a great time, when asked three players told me so. Even the one player that was never “into” the game agreed it was a fun romp and that it did what it set out to do well. I think Alien Survivor captures the feel of the genre extremely well and builds upon the foundation of Lady Blackbird to create a great, fun one night game. Unlike Lady Blackbird that can be played over various sessions I think Alien Survivor benefits from being a one-shot game.

Despite the hurdles and initial reluctance I’ll classify Alien Survivor a success. We all had fun and I think my players got a taste of another style of role-playing, something I want to continue doing, expand our horizons and all that!

Thanks to Will Hindmarch for a wonderful game and to my players, José, Pierre, Luis and Fernan for letting me try out new games on them!

Have any of you played the game? What have been your experiences with Lady Blackbird, Alien Survivor or any of the Lady Blackbird hacks out there?