UPDATE: Contest is now closed. I will announce the lucky winner next week!

As you probably already know we joined OneBookShelf’s Blog/Podcast Support Program recently. And if you haven’t already done so, you can still use the 20% discount, I wrote about some days ago. But there’s more!

We got provided with a couple of PDF products we can give away for FREE! And since these coupons are valid for one customer only, we decided to run a couple of contests in the coming days/weeks.

The first free product I want to give away this week is Crafty Games’ excellent fantasy game Fantasy Craft. So what is Fantasy Craft about? Let me quote from the first look post I wrote last year: 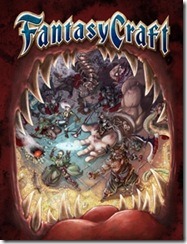 So, what is Fantasy Craft anyway? It’s Crafty Games’ take on fantasy role playing using the d20 system. Instead of creating a game that is more or less compatible to D&D 3.5 (like Pathfinder), they created an almost completely different game. Combat has been streamlined (Attacks of Opportunity are gone for example), there are a lot of cool new character classes and races, they came up with a new way to create NPCs and monsters, they totally overhauled feats and the magic system relies on magic points and skills. Wow! Of course I haven’t been able to read all 400 pages of rules, yet, but I am officially impressed. More than once I thought: “That’s how D&D 4th Edition should have looked like”.

And this week we are giving away a free copy of the PDF version of that book! Here are the contest rules:

I wish you all the best of luck!