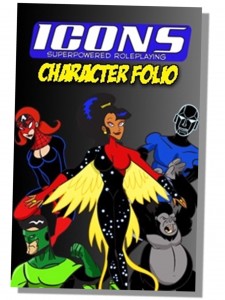 I am a confessed ICONS fan, you can see my review and various character write ups (here, here and here), so when new products came up for sale in RPGNow I was thrilled. The new products are ICONS: The Skeleton Key, an adventure, and the ICONS Character Folio, an electronic tool to help create characters, randomly or point based.

The blurb for the Character Folio mentions the program prints character sheets and also mentions character silhouettes by ICONS artist Dan Hauser. When I saw all this I was thrilled and since I rarely use pre-written adventures I spent $9.95 on the character folio.

What do I think of it? Caveat emptor! Want to learn more? Read on…

Let me be totally clear the program does what it claims to do, in a well functioning and intuitive interface, but I am underwhelmed. Random generation is simply the matter of clicking a button, the addition of randomly generated names and other details are nice, but I already had used a fan created webpage that does this.

Point based is another matter; the ability to create characters of different point values was a big selling point for me. How powers and details are selected follows a logical flow, which requires at least a passing familiarity with how characters are created, but easily enough.

The character sheets generated are very plain, just the text, no formatting, and no bells and whistles. Unattractive really, something I could put together in the most basic word processor. But this disappointment is my fault, not the designers. It’s an example of my expectations being greater than the actual product, something I have only myself to blame for not waiting before I purchased it or digging in a little deeper before investing in the product.

Likewise the character silhouettes, they are nice, and ever since my first Champions book had character sheets with silhouettes I love the idea of character sheet with a place for the player to draw his character. I had assumed the Folio character generator feature would integrate them, but alas this is not the case. Again it is an example of me expecting too much and assuming, and you know what they say about that….

The program function wells, does what it claims and is a useful tool for ICONS players and GMs. Is it worth the price? Well that’s debatable. ICONS is such a simple system that an electronic tool is not a necessity. I do all of my prep electronically so I know I’ll make good use of it. My true complain is the claim that the Character Folio will include powers from future supplements, which was a big selling point for me. Alas, powers only have their name in the Folio, no rules, so if in the future a supplement has the Supercalifragilistic power, my Folio will (supposedly) include the name of the power in the list, but I will have no idea what the power does. I know the publisher is protecting his IP and wants to drive sales, but this feature of the Folio is much less useful than it sounds.

This review may sound a little negative, and as you can tell I am not 100% satisfied with my purchase, but I only have myself to blame. I need to take my own advice, Caveat Emptor.