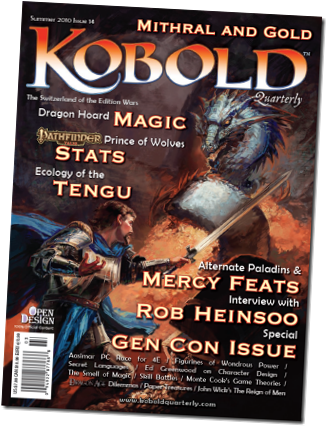 The latest issue of KQ is 100-pages thick and contains articles written by a lot of industry veterans, including roleplaying luminaries like Ed Greenwood and Monte Cook.

The cover art reveals two of the themes of this issue: Loot and Paladins. For D&D 4E players there are finally rules for playing Aasimar characters (which always made great paladins) by Kolja Raven Liquette.

The love for the paladin continues with James Graham’s variant rules for Laying on Hands for the Pathfinder Roleplaying Game and the Men of Honor article by Dan Voyce which provides us with an in-depth look on alternate Paladin codes.

Although not directly related to Paladins, “Moral Choices That Matter” for the Dragon Age game by Jeff Tidball, is a great read for everyone who runs a campaign that features paladins or similar characters. In my opinion every roleplaying game benefits from the player character’s being subjected to moral dilemmas that really mean something. Jeff’s article should be read by every GM, even those who don’t run Dragon Age!

The second theme of this issue is treasure (or as we gamers tend to call it: “loot”!). Especially Michael Furlanetto’s article “Hoard Magic” stands out here. The idea behind Hoard Magic is that a large dragon hoard warps the environment around it to suit the nature of it’s owner. Again, while the article was meant for D&D 4th Edition, the basic idea can probably be easily used in other games as well.

Another of my favorite articles was “The Reign of Men” by John Wick and Jesse Heinig. It’s the continuation of the “Wicked Fantasy” series. Wicked fantasy is a re-invention of the classic core races. In August the complete series will be released as a PDF edition. I have to admit, that’s something I am pretty excited about. I love to give stereotypical RPG elements a twist in my campaigns and this series looks like great inspiration. In “Wicked Fantasy” humans are the oldest race and they’ve developed without the influence of gods, so they have some innate resistance to divine magic, but if they choose to adopt a divine patron, they do it with such fervor, that they get a hefty bonus. I haven’t read the articles on halflings, dwarves and elves yet, but I’ll do so as soon as the book is out in August!

I would love to write more about all the wonderful articles I’ve discovered in this issue of KQ, but this would probably go beyond the scope of that review. As with all the issues of KQ I’ve seen or reviewed before, the articles are of very high quality and the artwork is very good.

By the way, after reading through KQ issue 14, which has been provided as a review copy by Open Design LLC, I put my money where my mouth is and finally subscribed to the print edition of Kobold Quarterly. The shipping costs to Germany are a bit high, but I think it’s worth it!

If you prefer a PDF copy, you can either get it from the KQ store or from DriveThruRPG. One issue sets you back, just $7.99.