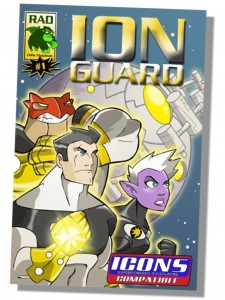 While some people are out carousing on a far away gaming convention currently taking place (don’t ask I won’t name names), others have to mind the shop and console themselves with picking up a new gaming supplement on RPGNow. Seeing that Ion Guard by Radioactive Ape Designs had come out for ICONS I snatched that baby up. I still have not finished readying it all the way through but I really like it and I want to share my first impression.

I had seen Ion Guard available for the Bash! superhero game, as interesting as it sounded, I do not own Bash! So despite being interested I passed. When I saw it for my current favorite supers game I couldn’t wait. The game is written by Colin Chapman who wrote the excellent Atomic Highway, an ENnie mominated game that Michael recently reviewed, and also wrote the first supplement for WR&M, From the Imperial Forges, so I was not concerned for quality.

Still I must say it blew me away. From the layout, to the art, Ion Guard is great. The Ion Guard is an intergalactic police force protecting the universe in the far future. It obviously has influences from the Green Lantern Corps (there is even an oath!), but I also got a Legion of Superheroes feel from it. It seems very open ended, lots of inspiration, but also a lot of ground for the Game Master to give it his or her own twist. If you read my posts on comic books inspiring RPGs you know my love for the Legion, what you may not know is that Green Lantern is my favorite DC Comics hero! The Ion Guard organization even gave me a Jedi Order vibe, but in a good way.

The few villains and characters seem interesting. I love the look of the book, despite some of pages having oddly blank spaces at the end of sections, and the inclusion of a sketch gallery at the end is inspiring. The introduction says this is the first of a series of books focusing on space heroes, creatures and empires. Based on my first impression of this one, I’m on board for the upcoming ones.

On the drive home from work I called one of my players and he was excited about what I told him about Ion Guard so this may be our ICONS game, who knows! I’ll keep you posted and tell you more when I give the concepts in the book a proper spin.

The one RPG I wholeheartedly recommend to any gamer is …