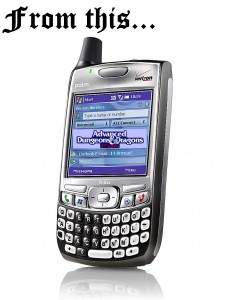 I’ll admit it, I was a holdover. I didn’t make the switch to an iPhone until last winter. Before that I had an ancient Palm Treo that worked perfectly well for years. I used it to browse the internet, and on it I planned many adventures and campaigns. I had used an iPhone and loved it so when I had the chance to end my old mobile phone contract and switch I took the plunge.

Despite all the controversy surrounding the recent iPhone 4, for me the iPhone is a great tool. I use it for all sorts of things, including organizing my campaign! I use it to take notes, do prep when I’m away from the computer, read PDFs (easier said that done in some instances) and recently, I’ve even run a game straight from the iPhone! 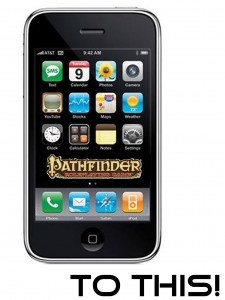 So what does the iPhone offer that has enhanced MY gaming experience? I can’t attest for all the applications out there. I haven’t brought that many, I haven’t gone app crazy; many of the ones I use are free. I’m currently running a Pathfinder RPG game and these are the tools I use on my iPhone to make running my game easier:

Dice Bag (can’t find it on iTunes anymore) – This was the first game related app I downloaded the same day I got the iPhone. It’s a VERY simple dice roller that allows you to roll all the typical dice as well as 3d6 and 4d6 dropping the lowest die. No fancy animations, just the sound of rolling dice. As simple as it seems it did what it said it would, randomly generate numbers.

Awesome Note – I got this when I was trying to find a better option than the Notes app that comes with the iPhone. Michael recommended it and it has lived up to the expectations. I love what it does, the interface, how you can organize notes and integrate information. It also uploads notes to Google Docs which is a great feature. I use it for gaming notes, not only for this campaign but for future games. I even wrote some blog posts with it while traveling.

GM Toolkit – A free app I recently downloaded. It has a dice roller, including the possibility of rolling series of dice and applying different modifiers, say 10 rolls of a d20, each with a +5. A feature that allows you to generate random rooms (something I am yet to use) and a random name generator as well as random name generator for unusual places, both great features when you have to come up with a name on the fly! 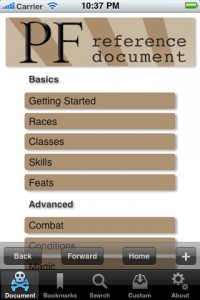 I know I may be a little late on the iPhone bandwagon. There are some excellent lists and posts about apps for gaming; I’ve consulted EN World’s on more than one occasion. On this post I’ve just considered how the iPhone has enhanced my face to face gaming experience. There are many other ideas on how it could, and has, enhanced electronic gaming, be it Play by e-mails or Play by Posts. I am yet to get an iPad, I can only imagine all I’ll do with that…

Just so you know I have a 32GB iPhone 3Gs, and have not switched to the iPhone OS4. Recently I tried an HTC Evo with the Android OS and thought it was great, who knows what the future holds!?

Do you use your iPhone for gaming? What apps do you use?