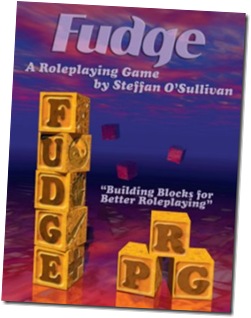 For some reason Fudge, the roleplaying game by Steffan O’Sullivan back in the nineties, is something like the unloved uncle to the popular FATE system. A lot of gamers have heard about FATE, especially after Evil Hat released the Dresden Files Roleplaying Game, which uses the latest version of the FATE rules, but only a few people have an idea what Fudge is. Recently I got the “Fudge 10th Anniversary” hardcover book and I am totally loving it. So I decided to give my readers a few reasons why they should check out Fudge, too.

Although I love Fudge very much, there are some drawbacks. Alas the organization of the book is not as good as it could be, which makes things a bit hard to follow when you read it for the first time. But once you got it, it’s pretty easy to teach to your players. The toolbox nature of Fudge also means that the GM has more work than in most games. But if you can look beyond this, you’ll probably love Fudge as much as I do.

Musings about Combat in RPGs