This week’s Free Stuff is: Synapse 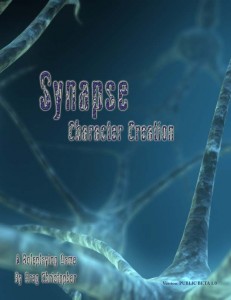 Synapse is a new RPG written by Greg Christopher. It was just made available last week as a Public Beta, to be improved over the course of the next few months into a final release. The PDF is nearly 300 pages long and in full color with stunning art donated by artists from around the world.

The game is a completely open-ended universal system with strong emphasis on character depth and personality. The primary elements of a character are seven mental attributes, including the namesake Synapse. In addition to these, your character chooses from 21 talents to customize precisely what their brain is good (and bad) at. This brain is then placed in a physical body. Build a race using a point-buy system from nearly a hundred biological characteristics; ranging from mandibles to turtle shells to wings to echolocation. This is followed by a similar system for culture where you define the society from which your character springs. Build any culture from Ancient Egypt to the Galactic Empire. Your character is the given life experiences using another point-buy system, where you make choices about your education, siblings, parentage, and more. All of these systems feed into a personality model to build a unique personality from 22 different motivation values. You define what exactly drives your character in their daily life. Choose from six morality models that go far beyond good and evil. On top of this, you build a network of NPCs which your character has met over the years. These NPCs integrate you into the social fabric of the game world, providing resources, contacts, allies, and more. Finally, choose from a long list of skills for any setting you need and buy your starting equipment (or property, if you are rich enough). As you can see, this game generates characters of stunning complexity. 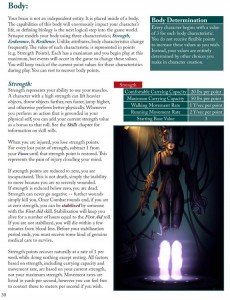 The game uses a d6 success-based mechanic to determine success/failure at tasks. The combat system involves a bullet-time model that resolves quickly and decisively. The game also includes a conversational mechanic where you can pick and choose motivational appeals to make in your adversaries to influence their decisions. Even if you choose poorly, you get a few chances to attempt to get the conversation back on track. It also has a standard roll-vs-difficulty and a manuever mechanic that works for chase scenes; from horses to starfighters. Your body is represented by three values; strength, endurance, and resilience (resistance to toxin/disease). You can take damage to these values independently as if they were different kinds of hit points. You also track mental stress to determine how well your mind is able to keep it together under adverse circumstances. As you take stress, you start to get shaky and make mistakes. If you reach a critical stage, your brain shuts down and you withdraw into a catatonic state and cower on the floor.

Since the game emphasizes the brain and not the physical form, it easily supports any setting. Your mental skills are used to run all the mechanics, not your body. Instead of drawing upon your physical body, simply replace your body with the values of a giant Mech and take to the field as if you were merely a giant armored combatant. Build a new body as a vampire, choosing from dozens of vampiric powers. Or teach yourself magic and choose from dozens of magical abilities.

Synapse is a powerful character development engine that can be used to play any setting, any genre, any game that you desire. You owe it to yourself to check it out. And give Greg some comments on his forum so that he can make the final build the best that it can be.

So take a moment and check out Synapse. Download the pdf, and check out the blog. Maybe even give Greg some feedback to make Synapse even better then it is! As always be sure to thank Greg for the free stuff!