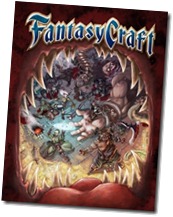 On September 1st I announced a Fantasy Craft giveaway contest in order to celebrate Crafty Games latest release: “Time of High Adventure”. There have been 30 eligible comments and two late entries which couldn’t be considered. Instead of rolling my trusty d30, I used random.org to generate a truly random number between 1 and 30. The lucky number was 29 this time and so, Typhon won!

I already sent him an email and when he accepts his prize, he’ll be reading Fantasy Craft in no time. In the unlikely case he doesn’t accept, I’ll do a second drawing. Typhon, if you read this and you haven’t got an email yet, please contact me using email (my email address is shown under that post).