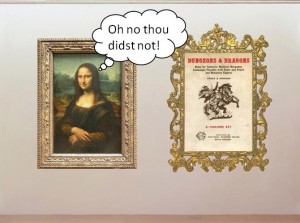 The idea of a museum dedicated to role playing games sounds intriguing. I had never even considered the idea until I found this website, The Museum of Role Playing Games. The idea, while farfetched, woud be awesome!

The collection at this virtual museum is far from extensive, but this is obviously a labor of love and shows great dedication. There are some great sections about Empire of the Petal Throne and Jorune, both games that have always intrigued me and I have never gotten my hands on any books for either game.

There are some references in there to games I had NEVER heard of that started me on the quest to learn more of these games. I think a little visit to the virtual RPG museum is a worthwhile trip. Hope you enjoy it as much as I did!