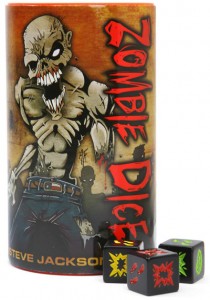 While I was at the Penny Arcade Expo I waited in several lines to attend various events thought out the course of the three-day weekend. While waiting in the lines I noticed that just about every single person was playing a game. Be it a hand-held gaming device like the Nintendo DS, Sony PSP or iTouch, to Card and Dice games.

Just from my personal observation of the different lines I had waited in the three most popular games played in line where Pokémon on the Nintendo DS, the Magic the Gathering card game and Zombie Dice.

Some point late in our PAX adventure we decided we would buy the Zombie Dice game and learn how to play it. Unfortunately it would not be till after PAX that we would get our hands on a copy of Zombie Dice for the first time.

I am happy to report that Zombie dice is a fun, easy and quick game to play. The perfect game for waiting in a line with friends. The game comes with 13 dice. 3 Red, 4 Yellow, 6 Green and a dice cup. The dice have three possible faces. Shotgun blast, Feet and Brains. In Zombie Dice you play a zombie trying to collect 13 brains before you get 3 shotgun blast. The green dice are the least likely to land on a shogun blast where the red dice are most likely. You put all 13 dice in the dice cup and shake them up.

Rather then having me write out how this game works step by step take a moment and check out this Zombie Dice demo up at Steve Jackon Games website. They also have an unboxing video.

I do have a question for all the readers out their. This game is easy and fun and clearly as a bit of a cult following. Those of you who play Zombie Dice, do you play with any kind of modified rules? It seems like a game like this is very adaptable to home-brew rules. I am just curious if other players play with modified rules or not. Let me know!

Is D&D Insider worth up to 8$ per month?

Do we need those “What is a roleplaying game” sections?