I just got word from Open Design that they’ll be launching a new adventure design project called “Dark Deeds in Freeport”. As already revealed in the title, Wolgang Baur (Kobold-in-chief of Kobold Quarterly), Chris Pramas (Green Ronin) and Michael Furlanetto will be all on deck for this new adventure. It will be set into Green Ronin’s Freeport setting and compatible with the Pathfinder RPG by Paizo. If you are a fan of either or both, you have to check this out! Here’s the official press release: 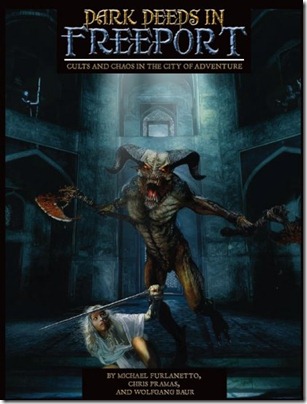 Open Design is launching a new adventure design project for Green Ronin’s pirate campaign setting Freeport: The City of Adventure. Entitled Dark Deeds in Freeport, the 96-page book will be an official Freeport product licensed from Green Ronin, compatible withPathfinder Roleplaying Game. Patron slots for the project will be available for purchase at the Kobold Store, starting at $24.95 for Basic-Level Patronage.

“I’m excited to work with Chris Pramas again on an RPG project—especially one with Cthulhoid monsters and pirates,” says Baur. “This partnership is like the bit in Captain Blood where Errol Flynn teams up with Basil Rathbone. Except Chris and I won’t duel to the death on a desert island.”

Open Design was founded in 2006 by roleplaying game designer and former Dragon magazine editor Wolfgang Baur to, as he put it, “create a community of gamers, artists, and designers discussing how to have more fun with adventures and how to write better ones.” Open Design pioneered the use of the patronage business model to fund design projects, a model that is now becoming widely adopted by small publishers.

Open Design uses an old business model called patronage to fund its design projects; you directly commission a game designer,mapper, and illustrators to create an adventure or sourcebook for your favorite roleplaying game.

What are the benefits of becoming an Open Design project patron?

As a Patron, you can participate in project discussions, brainstorms, and polls, read design essays and have the opportunity to playtestand review material. Senior Patrons have more access: preview maps and artwork, maybe suggest an NPC or monster, maybe write whole sections; but there’s no requirement to contribute text!

Sponsors are lords of the project, with direct feedback and coaching on their pitches and proposals from the lead designer and Wolfgang Baur, plus the ability to add an NPC of their choice, invite friends in as guests, commission an illustration, and more.

Regardless of the level of patronage, you’ll get a PDF of the final product, full credit and acknowledgement, and the option to purchase a hard copy of the project at cost (no markup to you, dear patron!).