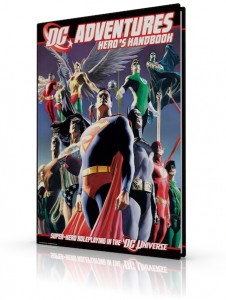 This past weekend I began a new campaign. We reached a natural lull in the ongoing Pathfinder RPG campaign, which has run for 65 (almost) weekly sessions and decided to put the game in hiatus for a couple of months and try the superhero campaign I’ve been itching to play for a while now, and about which I have written here in the blog (Here is the link to the last post about it, the questionnaire, that includes links to the fiction I wrote as an introduction to the campaign).

We gathered at the beach apartment of a friend (the benefit of living in a tropical island) created characters and began a campaign using the DC Adventures RPG. Despite my love for ICONS It proved to be too rules light for my group, the prefer a little more crunch in their gaming diet, so we went with the Mutants & Masterminds 3rd edition rules as presented in the DC Adventures book.

I know I proposed a Virtual Book Club to read DC Adventures and I am YET to publish a post about it, but real life (work, illness and other minor details like that) has kept me from writing a post to discuss the game as thoroughly as I’d like. So the real review of DC Adventures is still forthcoming (talk about wasted expectations!). What I intend to talk about is the campaign itself and two tools I’m using to enhance the experience.

Despite having told my players we’d be playing this past weekend well in advanced by the time the weekend came around only three characters were ready!

We only had three copies of the books among 7 players and a GM, making a Mutants & Masterminds character requires some math and since I was the only person who had read the complete book I decided I would help the players create their characters. I quickly realized I needed some technology tool to help me speed things up and keep track of all the possible power combinations. At first I was going to get the Mutants & Masterminds 3rd edition rule set for Hero Lab by Lone Wolf Development but since this is only a beta release I decided not to. This is NOT a knock on Hero Lab! I own the Pathfinder RPG rule sets and use them extensively, there are excellent, but I wanted to explore other possibilities for this game.

The first thing I did was go lurk in the Atomic Think Tank, the message boards for Mutants & Masterminds. It is a really helpful community full of interesting and well informed discussion of the game in all its versions. I found the DC Adventures/3E Resources topic and there I found the link to an Excel Character Generator for DC Adventures.

The Excel documents created by Ski is EXCELLENT, if you are familiar with Excel you should have no problem navigating the generator. I fiddled with it one afternoon and pretty much got the hang of it, there was a learning curve as I began using it but it proved invaluable for character generation. It allowed me to build the individual components that make powers, put them together and simplify the math needed for character generation.

Character generation still took anywhere from one to two hours, but only about half the players had a working knowledge of the system and we took our time to make sure they ended up with the character they wanted.

After character creation we began playing on Saturday from about 12 midnight to 5 am and then from noon to 7 PM on Sunday. Needless to say we had great fun and everybody was stoked for Tuesday’s regular game. While prepping for the game I began to think of ways to distribute information about the campaign to the players in an effective way. I write a lot of background for the game, use images and pictures for NPCs. In the past I would print them out and hand them out to the players. I’ve also tried e-mail and Yahoo and Google groups. While all my players use computers they have different level of skills or interest. Groups I’ve created in the past have suffered form only about half the players actively participating. E-mail has been a little more effective but not as efficient as I’d like.

Recently Facebook unveiled their new groups which allow the groups to have a group chat, an e-mail address and to be created as a group open to everybody, closed (membership is public but not everybody can join) and secret. The group allows you to share pictures, post news, updates, and links, create events and share simple word processing documents.

I created a group and soon began sharing images for the PCs and NPCs in the campaign. I also created three documents, one a roster of PCs, a list of NPCs (34 so far in 3 sessions) and a collection of new items about the events happening in the world around them.

Think what you will of Facebook it has become so ubiquitous that ALL my players use it to communicate. The group may not be the most user friendly option out there; I still think Google Groups and Google Documents offer much better options, but alas, not all my players use them. Facebook is just too convenient. So far the players are commenting and participating. Are all of them using the group? Not all, but I have hopes, let see how it goes!

So there you are, two new tools I’ve begun using for my new campaign. What new tools and ideas are you integrating in your games, be they new or ongoing? I’d like to know…