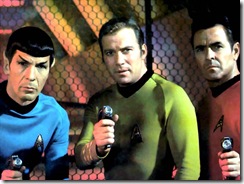 I still remember the late 70s, early 80s when I first watched Star Trek on TV. My parents actually introduced me to the series, since they were fans themselves back then. Luckily for me, Star Trek was shown in the afternoons, so I was able to watch it regularly. I didn’t mind the sometimes bad acting, weird scripts and the flimsy cardboard sets. I was thrilled by the idea of travelling to far away stars, meeting alien species and the science and technology that supposedly made these things happening. In a way Star Trek not only sparked my interest in Science Fiction but in science as well.

Although my all-time favorite SF series is Babylon 5, I still have a soft spot for all things Star Trek. When I stumbled upon a Microlite20 game based on the Star Trek Original series, I was overjoyed. “Where No Man Has Gone Before” looks exactly like what the doctor ordered: A set of lightweight rules set into Star Trek TOS era with some subtle tongue-in-cheek humor. But since I was working on other projects at the time, I put it back on the shelf.

During my vacation I stumbled upon this awesome game again and showed it to my girlfriend. She shares my love for all things Trek (even though she’s not generally a SF fan) and she told me she would love to play in a Star Trek campaign. Since I am currently not running anything myself, I started to make plans on how I could finally put Mike Berkey’s rules to good use.

I checked his site for some updates and noticed that someone actually created some awesome looking paper miniatures for that game, that really could come in handy. And of course, the miniature of the Captain has his shirt ripped. 🙂 Alas this didn’t help me to decide what kind of campaign to run.

I started doing some research on Star Trek ships of the TOS era and realized that the only Federation ship class actually shown in the series was the Constitution class. Some non-canon sources mentioned other ship classes as well, but alas even then the selection was quite limited. One of those ships that piqued my interest was the Daedalus class. Alas it was suitable for a TOS campaign since this class has supposedly been decommissioned in the 22nd century, several years before the USS Enterprise roamed the universe.

But why not run a campaign set between Enterprise (the pre-TOS series) and the Original Series? Since the Daedalus class was commissioned directly after the birth of the Federation and the end of the Earth-Romulan war it would be the perfect vessel for my player group. Because of the lack of information on that period I could easily design a campaign without having to worry about canon that much. There’s also a great illustration of the USS Daedalus that fits better into the Enterprise era. Perfect!

Alas there are some novels that might mess with that plan of mine, but I think I’ll just ignore those. Even the official Star Trek canon is full of inconsistencies and errors, so who’s going to judge my little campaign? 🙂

Rules-wise it shouldn’t be a big difference if I use “Where No Man Has Gone Before” for a TOS-era game or a game set 100 years earlier. But since the Enterprise series actually provides quite a lot of details to work with, a game set in the early 2160s is actually easier to prepare than a game in the time of Kirk and Spock. As my plans progress I will probably post a few updates.

Have you ever run a game in the Star Trek universe? If so, have you used one of the licensed games or a homebrew? And what are your thoughts on my choice of era?

What I am working on right now