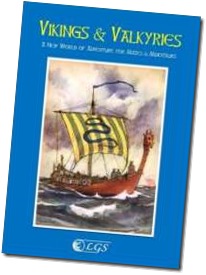 Some of you probably know Mazes & Minotaurs the old-school game which is much younger than it claims and which is set into Mythica, which is a mythic version of ancient Greece. Today my good friend Andrew pointed out a thread on theRPGSite to me that mentions Vikings & Valkyries, an alternate setting for M&M.

When I was a kid I loved reading ancient myths. While I probably read thousand times as much stuff from ancient Greece I always had a soft spot for Norse mythology. With Vikings & Valkyries there’s IMHO now a perfect way to experience adventures in the mythical world of Midgard, rubbing shoulders with dwarven sorcerers, strong vikings and perhaps even Odin himself.

The 50-paged free PDF contains the setting of Midgard, new player classes, new combat options for the M&M rules, rules for drinking and games, new creatures, and a couple of mythic items including Thor’s hammer, Mjolnir. If you are into old-school gaming and Norse mythology you definitely should check this out.

Please note that V&V is not an exact depiction of viking culture and history. It’s more like Hollywood’s version of the vikings with horned helmets and all that stuff. If that doesn’t turn you off, you’re definitely in for a ride!

You can download the free M&M rules and the V&V setting from the official Mazes & Minotaurs site.