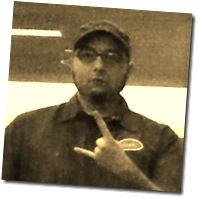 The week I spent at Gen Con 2010 was one of the most exciting weeks in my life. These few days were much like a roller coaster ride for me. It was my first Gen Con, my first time in the US even. For me walking through the Indianapolis Convention Center among all those gamers was a feeling I can hardly put into words. But what made this week even more memorable were the people I met there. In just a few days I made a lot of friends.

One of these friends is Jason Marker. Jason is a freelance writer/game designer who I met at Zachary Houghton’s house. He was staying with us for two nights and I took the opportunity to chat with him about his experiences in the industry. He has worked on several Robotech and Rifts products and more recently contributed to Fantasy Flight Games’ Rogue Trader and Deathwatch lines. Alas we didn’t have the opportunity for a proper interview, so I asked him if he was willing to answer a few questions about the life of a RPG industry freelancer via email later. He agreed. So here are the questions and answers – enjoy!

Stargazer: Thanks again for taking your time to answer a few questions for us. Can we please start by you telling us about yourself? Who is Jason Paul Marker? Where are you from and most importantly when did you start playing roleplaying games?

Jason: So, I guess we’ll start at the beginning. My name’s Jason, I’m from Detroit Michigan, and I make games for a living. I’m married to a woman with very strong geeky tendencies, she’s one of my better players and big into RTS/Turn Based games, and we have an eleven month old daughter who is well on her way to geekdom. I’ve been playing RPGs since middle school, when I was introduced to the original red box D&D by a good friend of mine, so for about twenty years now.

Stargazer: How did you become a freelancer in the RPG industry? Has this always been the plan or was it something that grew out of people you knew?

Jason: By accident. I was taking classes at a community college in St. Louis, one of which was a creative writing class. My final for that class was to write a short story and submit it for publication. I wrote a very short piece that was originally untitled, and submitted it to Palladium Books’ The Rifter. Much to my surprise that story, ultimately titled Three Words, was published in Rifter 8.

Becoming a freelancer was never part of my plan when I graduated from high school. I initially attended university to pursue a degree in music education, with the ultimate goal of becoming a high school band director. Sadly, that didn’t pan out and I pursued opportunities elsewhere. I always dreamed of writing, but never really considered it as a career. It’s funny how life works sometimes.

Stargazer: How would you suggest people interested in doing freelance work go about it? Is there a special education that helps you get into that kind of job or do you just need to know the right people to ask?

Jason: If you want to freelance, you need to know games and you need to know how to write. You need to be assertive, confident in your work, and open to editorial input. I can’t stress that last part enough. Have some strong writing samples, published pieces are especially valuable here, and a strong resume. Send these items to every game company you can think of, and be persistent with follow-ups.

Being well read helps, and by that I don’t mean that you’ve read both Burning Wheel and Game of Thrones. To be a good writer you really need a strong base of knowledge about literature and the world around you. Get to know your way around your local library and used book stores. Read voraciously, both fiction and non-fiction. Learn to love research. Also, write every day. If you’re going to call yourself a writer, you need to be writing and constantly honing your craft.

As for education, well, a writing or journalism degree helps but isn’t really necessary. As I said earlier, I originally went to university to be a music educator and ended up with a degree in culinary arts and professional training as a chef. Mostly you need to know games, and you need to be able to take editorial direction/criticism.

Stargazer: You have worked on quite a few projects in the past? What was your biggest project so far? And what was your favorite project? How long are usually the projects you work on?

Jason: My biggest project, and also my favorite, was working on the Robotech: the Shadow Chronicles RPG. As a freelancer my assignments are given by the word, I typically work on assignments that run between 14,000 and 28,000 words, and typically have a month or two to complete.

Stargazer: In a lot of industries creative people are hassled with too tight deadlines and the all-too-powerful marketing department. Is this the same in the RPG industry or are things a bit more lenient there? Have you ever worked on a project that was particularly rushed (don’t worry, you don’t have to give us any names) or was their always enough time? Are you usually involved with playtesting?

Jason: I personally haven’t felt rushed or hassled by deadlines that often. I have very little interaction with any marketing, so that’s never been an issue. As for playtesting, again that’s not my bag so I’m not involved in it.

Stargazer: Can you tell us a bit about what are you working on right now or is this top secret? You know, you can tell us. We won’t tell anyone. 😉

Jason: Right now I’m between assignments, so I’m mostly working on being a dad and keeping my house in order. I have some things coming down the pipe though, so I’ll be working again in no time.

Stargazer: Aside from yourself, who is your favorite game designer? Is there something you would love to work with in the future?

Jason: I have a healthy respect for many game designers, but I’d rather not list them here for fear of leaving one out.

Stargazer: Thanks again for taking your time to answer a few questions for us. The team of Stargazer’s World wishes you good luck on all your current and future projects!

I am pretty sure Jason will be watching the comments on this post, so if you have any more questions feel free to ask.

Time to Speak Out with my Geek Out… Role-Playing Games in my case!