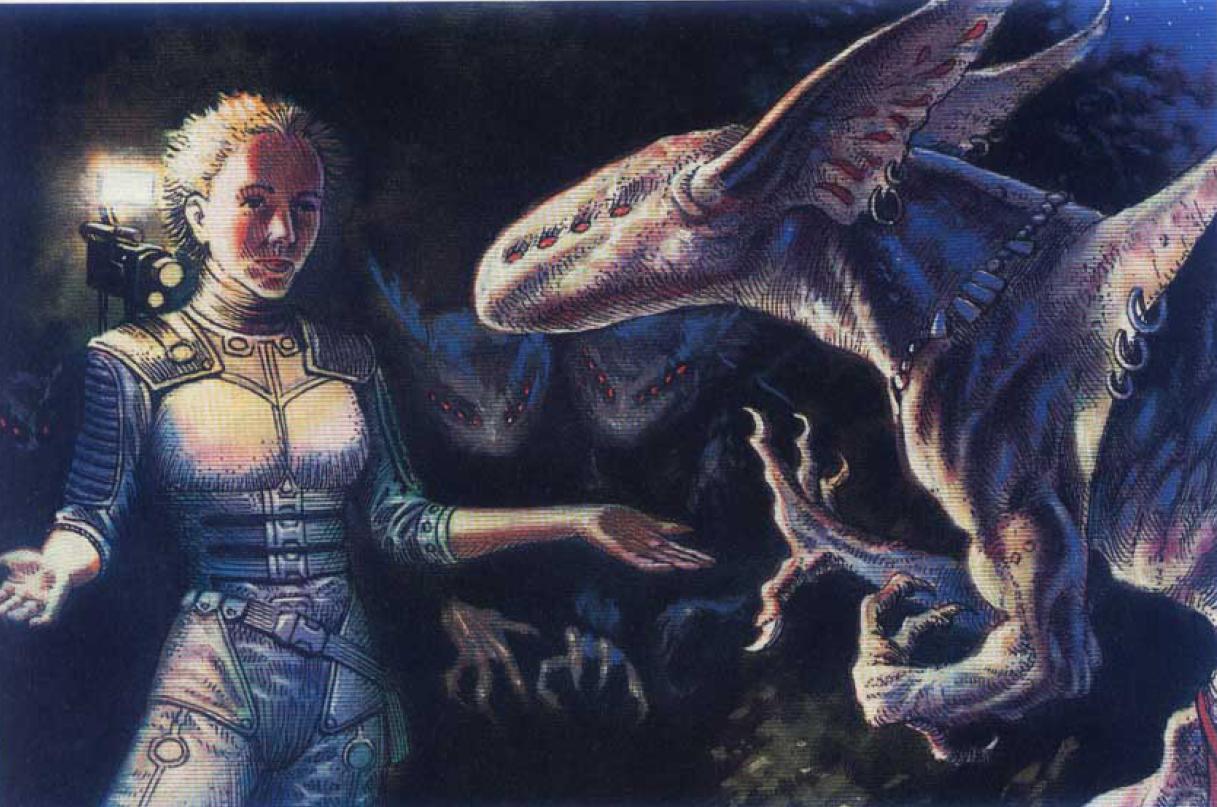 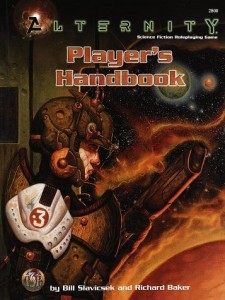 Alternity, by Bill Slavicsek and Richard Baker, is a science-fiction role-playing game released in 1998 by TSR (now Wizards of the Coast). It bills itself as “a framework for all kinds of contemporary to far-future science fiction adventures.” Indeed, its two original settings are Star*Drive, a far-future space-opera, and Dark•Matter, which is a modern-day game drawing much of its inspiration from conspiracy theories and the X-Files. It was also the game that was home to the fifth edition of Gamma World, and the Starcraft Adventures setting, which was a toned-down version of the system used for an RPG based on Blizzard Entertainment’s well-loved RTS.

I consider Alternity the greatest RPG I have never played.

Frankly I’m a little afraid to play it at this point. It has taken on an almost mythic significance in my mind.

I got my hands on the Player’s Handbook back in ’98, but in typical D&D-like fashion it also required the Gamemaster Guide, which I wouldn’t pick up until some time in 2005 along with most of the other supplements from a used RPG bookshelf at my FLGS of the day.

Anyway, let’s get to the heart of the matter.

In order to play Alternity, you will need at least two hardcover books: the Player’s Handbook and the Gamemaster Guide as I mentioned above. If this setup sounds familiar, well, it has been a staple formula of Dungeons & Dragons and its clones for years. Once upon a time they retailed at $29.95 each, these days you can find them for a little less than that on Ebay when you can find them.

The full-color interior artwork features many excellent pieces by rk post, Todd Lockwood, and maps by Rob Lazzaretti. Although the game is intended to be capable of handling a range of times from the present to the distant star-faring future, much of the art is clearly futuristic, and the implied setting of the books as a whole was released as the Star*Drive campaign setting. 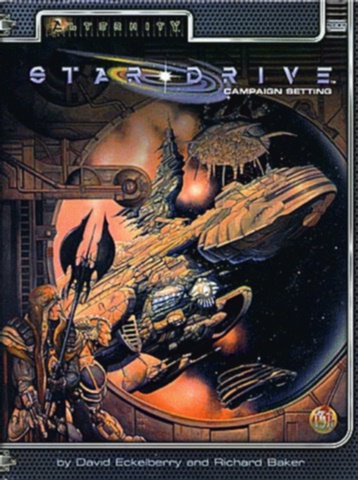 rk post’s illustrations of the alien races in the character creation chapter have stuck with me throughout the years, and probably done more to keep Alternity in my mind than anything else. There are the fraal: the classic, lanky gray aliens with big black eyes and psychic powers. You’ve got the mechalus, who are essentially humanoid circuitboards with thick strands of cable-like hair. Calling the weren “wookies with tusks” doesn’t really do justice to the sheer brutal presence that post’s art conveys on the page.

Then there are my two favorites: the bizarre, eight-eyed, bat-winged, lanky sesheyans, who vaguely resemble stealth bombers; and the t’sa, who are basically caffine-powered tech-obsessed lizardmen with impressive head frills.

But this is an RPG, not an art class!

One thing I will never forget about Alternity is the dice. Most rolls in Alternity use two dice: a d20 called the “control die” and either a d4, d6, d8, d12, or d20 as the “situation die.” Oddly the 10-sided die is absent from the lineup. I suppose on Alternity gaming nights you could have loaned all your d10s to your friend who plays Vampire: The Masquerade.

You want to roll low. Most basic actions involve rolling d20+d4, but there can be a “step modifier” depending on the difficulty of the task at hand.

Think of the dice as a continuum, with -d20 being the easiest, and the most difficult being +Xd20, although the book suggests that more than +3d20 is so difficult you may just want to rule it as impossible.

A step modifier slides the situation die along this continuum to determine what you should roll. There’s even a d0, which is really just a placeholder to say you should roll the control die by itself. It occupies a comfortable little spot between -d4 and +d4.

Alternity also represents degrees of success. Each skill has thresholds. Above, your Seduce skill would look something like “Seduce 3 (13/6/3).” Rolling under a 13 means you have achieved an Ordinary success. Under 6 (one-half your score rounded down) is a Good success, and 3 (one-quarter) is Amazing. The most prevalent use of this is weapon damage, which increases in severity depending on your success, but it also matters in time-sensitive challenges and other circumstances where it’s important to know not just if someone completed a task, but how well they completed it.

This particular mechanic has always fascinated me. In the late 90s TSR was competing (though I use the term loosely) with White Wolf’s World of Darkness games, which used pools of 10-sided dice and had degrees of success based on how many successes you accumulated in a roll. I like the combination of variability and shades of performance Alternity is able to offer with only two dice.

In 1998 the announcement of Dungeons & Dragons 3rd Edition was about to dawn. Alternity’s system greatly resembles a transition between 2nd Edition AD&D and 3E D&D mechanics, and contains the best of both worlds in a lot of ways.

It probably isn’t a coincidence that the Star Wars Roleplaying Game: Saga Edition, which came out on the eve of 3.5 and represents a phase between that and 4th Edition, was also designed by Bill Slavicsek.

It’s been 13 years, and I still haven’t played the damn thing. Part of me is afraid that after all this time the game just won’t be how I’ve envisioned it. Part of the problem is finding people who want to play something other than Dungeons & Dragons (and don’t get me wrong, I love playing D&D 4th Edition). I could sit here making excuses all day long, but I won’t. Instead I shall challenge myself: by the end of this year, I will have played at least three sessions of Alternity with friends, even if I have to drag them kicking and screaming to the table.

How about you? Will you join me? Grab the books however you can get your hands on them, and start up a game. You can find additional resources and information over at the official group, AlternityRPG.net.

Then meet me back here, and we’ll see what nostalgia has wrought.