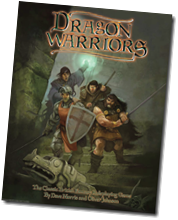 Dragon Warriors is a classic British fantasy roleplaying game that has originally been released in the mid-eighties by Corgi Books. In 2008 Magnum Opus Press released Dragon Warriors in a new edition which basically compiles the material of the original game into a series of new books.

The core rulebook is a 258-paged hardcover book with mostly black-and-white interior. The book has a pretty clean layout and very nice black-and-white artwork. While it doesn’t look on par with recent books my publishers like Paizo, WotC or FFG, it’s definitely a good-looking book with a nice old-school charm.

Alas Magnum Opus Press recently lost the license to the game so the game is currently not available as PDF download anymore. But you might still track it down in your FLGS. The license went over to Serpent King Games which will re-release the game in a revised edition in the near future.

The twenty chapters of the book contain everything you need to play in a Dragon Warriors game including character creation, rules, a complete setting (“The Lands of Legend”) which is based on medieval Europe, and an extensive bestiary.

Dragon Warriors’ system is class and level-based and clearly shows its age. The included classes in the core rulebook are Knight, Barbarian, Assassin, Sorcerer, Mystic, Elementalist and Warlock.

Knight and Barbarian are basically what you expect them to be. While the knight is a noble fighter clad in heavy armor, the barbarian is a more lightly armored berserker hailing from the more uncivilized areas of the world. Assassins are an mixture between thieves, martial artists and even have some psychic abilities. Sorcerers resemble D&D’s wizards, Mystics have psychic abilities like ESP and clairvoyance, Elementalists specialize in the control of the five elements (Earth, Water, Air, Fire, and Darkness), and the Warlock is basically a fighter-mage. While there are actually more magic classes than mundane, the rules assume that most games only make use of the Knight and Barbarian classes.

Each of the five included classes has its own skills and basically every class has it’s different rules for said skills. Most skills actually work like D&D’s feats. You either have a certain ability or you don’t. Others work like you would expect from skills. Here’s an example from the book:

Ride Warhorse
All characters can ride, but only Knights, Barbarians and some Warlocks have had the long years of special training required to ride a warhorse (p. 245). Warhorses are larger, stronger and far more spirited than ordinary horses, making them impossible to handle if one is not ‘born to the saddle’.

The Lands of Legends is a human-centric setting and it’s assumed that the majority of the player characters are human. Obviously some classes can be picked up by elven or dwarven characters, too, but no clear rules how to create those characters are given.

Each character has five attributes (Strength, Reflexes, Intelligence, Psychic Talents and Looks) which grant modifiers to the character’s abilities like Attack, Defence, Evasion etc. if very high or low. The standard task resolution method is running 2d10 and comapring the result with one of the abilities. A roll of equal or less is successful. The GM can grant bonuses to the ability value if appropriate.

In order to hit in combat a character has to subtract the opponent’s Defence score from his own Attack score and roll equal or under the resulting number. When the defender is wearing an armor an additional armor penetration roll has to been made. The die used to make that roll is determined by the weapon used. Weapon damage is static. For example a Dagger always does 3 points of damage.

The chapter on magic contains the rules for spellcasting for each of the magic-using classes. There are separate spell lists for the different magic schools and the Elementalist lists contain spells for each element. I have to admit that I like Dragon Warrior’s spells a lot. Most of the spells are quite unique and flavorful. Here’s an example:

Phoenix
This spell allows the Mystic to return from the dead. He (or more accurately his spirit-self ) must cast it the Combat Round after he is slain. The body immediately begins to smoulder and then burns fiercely; no natural means can douse this blaze. After 5 Combat Rounds (thirty seconds) the Mystic arises from his own ashes like the bird of legend. All his wounds are healed by the spell, but his Health Point score is permanently reduced by one. The revivifying fire will also destroy any equipment that was on his body—only exceptional magic items may survive, and this is at the GamesMaster’s discretion. This spell cannot be cast more than once a week.

A major part of the book is taken up by the description of the Lands of Legend, Dragon Warrior’s setting. The Lands of Legend are basically a mythic version of medieval Europe. But if you are interested in a more historic game, you could probably drop the magic classes and a run a game in the actual middle ages as well. The book even gives you some advice on how to tweak the setting to your preferred style.

The included bestiary is quite extensive and contains various monsters inspired by European mythology. Of course no proper roleplaying game would be complete without an introductory adventure, and Dragon Warrior contains one as well. “The Darkness Before Dawn” is a scenario for 4-6 1st-rank characters that a) shows the GM how to structure and run a typical Dragon Warrior’s game and b) is a great introduction to the Lands of Legends and the games’ rules.

Dragon Warriors is definitely an interesting fantasy game and a great alternative to classic American roleplaying games like D&D. Its rules show a certain age and if you are used to more modern systems this might turn you off, but the games’ rules and setting have a certain charm, especially when you like your games a bit more “old-school”. And if you are interested in the history of roleplaying games you definitely should check out Dragon Warriors. It’s *the* classic British RPG after all.

This review was based on a read-through of the PDF edition of the book which I got as a review copy from DriveThruRPG.