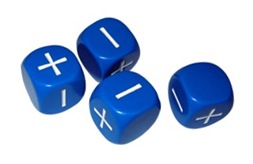 As you probably know I have a soft spot for the Fudge system. Alas I never had the opportunity to actually run a game with it, but from time to time I leaf through the huge Fudge 10th Anniversary book and think about what games I could run with it.

And perhaps the upcoming “Day of Fudge” is finally my chance to play or run some Fudge. Every first Saturday of June is the “Day of Fudge” where fans of this fine roleplaying game system are encouraged to run public Fudge events.

I am not sure if there are Fudge fans in my area but I might actually run a Fudge game at our RPG pub meeting in June. And I doubt anyone will mind when I miss the “Day of Fudge” by a few days. The important part is spreading the word of that fine game.

I also want to thank Patrick Benson from SinisterForces for the great idea! So if you enjoyed the event, please visit his blog and say your thanks.

So, what are your plans for that day. Are you running a game yourself? Are you attending a “Day of Fudge” game? If so, please post about it in the comments below.

UPDATE: #stargazersworld regular Fudgebob Dicepants asked me to let you guys know about the Official Fudge IRC channel. If you are tech-savvy you can connect your favorite IRC client to the irc.otherworlders.org server and join #fudge. Alternatively you can use this Mibbit shortcut to join the chat.