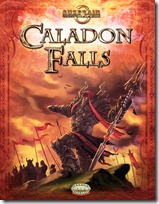 But that’s only part of what Suzerain is. It’s also a whole multiverse. Characters can move between worlds, if that’s what you wish. For high ranked characters one world might not be enough. The Suzerain product line contains various sourcebooks that provide players and GMs with details for the different Suzerain realms.

One of these realms is Relic, a high fantasy realm and the world Caladon Falls is set in. In order to play Caladon Falls you need at least the Savage Worlds Explorer Edition, but owning a copy of Savage Suzerain is also highly recommended.

I haven’t really had a chance to have a deeper look into the crunchy parts of the book, but from what I’ve seen so far, you should be fine with the core Savage Worlds rules for the most part. Savage Suzerain makes some minor changes to SW terminologies like Bennies are now called Karma and Power Points are Pulse, but these changes are explained in the “Savage Suzerain Play Now, For Free” booklet, which is – as the name implies – available for free. So If you got interested in Savage Suzerain, you might check this out. 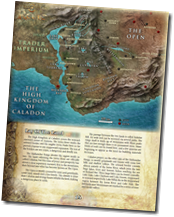 But let’s have a look at what’s there content-wise. The book is divided into two parts: a Player and a GM section. The Player section gives a broad overview of the realms of Relic with special emphasis on the lands of Caladon.

Caladon Falls is set into the so called War of the Wild. Caladon has been invaded by Warlocks who wield god-like powers and are followed by their monstrous hordes. The 148-paged book not only describes the lands at the time the invaders landed at the shores of Caladon but also contains a 12 episode Plot Point Campaign and 18 Savage Tales set into the aforementioned war.

Let’s have a look at the High Kingdom of Caladon. As the name implies it is ruled by a High King. The High King is selected by a council made up of the rulers of the seven kingdoms of Caladon. Each of the kingdoms is rules by one of the Noble Houses which are Killian, Laneer, Marron, Sumner, Thrace, Vesper, and Wallend. The state religion of Caladon is the Church of the Trinity which has more than just a fleeting resemblance to the Catholic Chruch.

The third pillar of Caladon (aside from Nobility and the Church) is the Wizards Guild. In Caladon people with the talent for magic have to be registered with the Wizards Guilt. Rogue mages are hunted down, at least in theory.

Since Caladon Falls was created with a certain time and place in Relic’s history in mind, the player’s choice of characters is limited to humans with ties to the High Kindom of Caladon. But in my opinion that’s not really a drawback. The Player section contains a plethora of new edges and drawback which should make it easier to create memorable characters fitting into the world of Relic.

Especially interesting are the Arcane Backgrounds which are called Pulse Paths in Savage Suzerain. Caladon Falls has rules for the Druid, the Enchanter, and the Protector. And if I am not mistaken they are meant as additional option not as replacements for the ones provided in Savage Suzerain. Again at least owning the free Savage Suzerain booklet might be helpful here. The Player section concludes with a extensive list of new powers and Caladon-specific gear.

The GM section of the PDF contains the background information on Caladon’s invaders and provides enough information for GMs to run a campaign set into the War of the Wild. Since I just got a copy of the book I haven’t really delved deeper into the GM section yet, but I plan to do so, as soon as I have the time.

But from what I’ve seen so far, Caladon Falls is definitely one of the more interesting Savage Worlds campaign settings out there. And although it’s high fantasy it’s not your standard garden variety setting with elves and dwarves, but more human-centric, which is a good thing in my book. You might need to invest into Savage Suzerain if you want to get the most out of it, but the free booklet might be enough to get you started.

Caladon Falls is currently available at DrivethruRPG for $19.95. The publisher Savage Mojo is currently trying to raise the funds for a hardcover printing of Caladon Falls. You can learn more about this fundraiser at IndieGoGo.