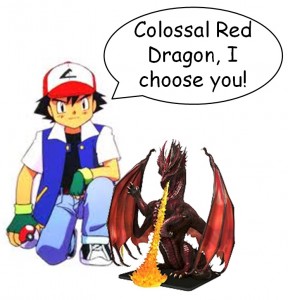 As I’ve said before, miniatures in my games a relatively new addition, only since 2001 when we started playing Dungeons & Dragons 3rd edition. I was not weaned into gaming through minis; I did not migrate from wargames to RPGs, instead I jumped right into gaming and was pretty much self-taught, so I never used miniatures. In fact I resisted! When D&D 3rd edition came out I realized the game required some sort of miniatures or counters (the arguments can be made that it CAN be played without them but indulge me for a minute) so I reluctantly dug out my old HeroQuest and Battle Masters miniatures and got to playing.

I figured I had a pretty diverse set of miniatures from these two games. True the Battle Masters minis had unit bases with various miniatures grouped together, but I solved this by getting some foam board, cutting out bases and inserting the miniature on the base. I packed them on some craft supplies boxes and I was set. I told myself I needed no more minis.

See, I had friends who owned a LOT of minis. I had played some Battletech and Epic but always with their miniatures, and I had seen the obsession with these little then lead, and later pewter, figurines. I had flirted with the idea of painting them, actually ordering a set of dwarves and skavens and trying my hand at painting them… Let’s just say the results were less than flattering. Unpainted miniatures looked so, unattractive that I was uninterested in them, so I figured that with no natural talent I was immune to the lure of miniatures.

So for the first couple of months I was happy with my box of HeroQuest minis and the game proceeded along nicely. It took me a while to get used to the miniatures at the table but I came to embrace them. Then WizKids started making the pre-painted Mage Knight miniatures and I told myself “I can get a couple of those sets and supplement my minis collection”. And so I started down a slippery slope…

Then Wizards of the Coast put out the D&D miniatures, little plastic pre-painted representations of the heroes and monsters of my favorite game. I tried to be casual about it, told myself “I am only getting a box to see them and that’s that”. Back home I stared at them in awe, they had removed my main obstacle for collecting miniatures, I did not have to paint them. I could take them out of the box and use them. I was hooked.

For some timer I would buy cases of every set they put out, and get all the special miniatures they put out, and then came the Star Wars minis game, and the Star Wars Starship Battles.  You get the idea, I was addicted. I had been bitten by the Plastic Crack bug. My friend José was the first one who told me about the term and it was true. I craved these plastic miniatures; I had to have them all!

Eventually I realized I had enough, and not enough place to store them, so I became more selective, getting only the occasional booster and some individual minis in the secondary market. I still got the dragons, the AT-AT, the recent Beholders set and of course, Orcus! But slowly, little by little, I got away from my addiction and for a very long time I kept away from plastic crack. 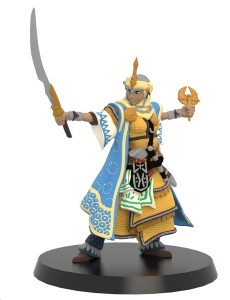 And then I recently fell off the wagon. José, the very same friend who introduced me to the plastic crack term, got back into Warhammer 40K and started telling me about some great deals on Rackham miniatures on eBay. I had always like the miniatures, and they had made some nice plastic pre-painted one, I just had to look. Soon after I was buying a set and watching a couple more, I was off the wagon and craving my plastic miniatures!

So imagine my rejoicing when I heard about the upcoming Pathfinder miniatures by WizKids. I’m really looking forward to this set. It feels like I’m coming full circle. I want to get me some of those miniatures, and there is a couple of other Rackham sets I’m keeping my eyes on.

What’s your experience with minis? Do you use them? Do you paint them?

PS – And just in case you don’t get the reference in the title, here is the video where it comes from:

PS2 – (Shameless plug) If you live in Puerto Rico, or will be here soon, on June 4th the Puerto Rico Role Players group will be hosting a miniature painting day where we will share tips and ideas on how to get the most of your minis. We’d love to see you there!