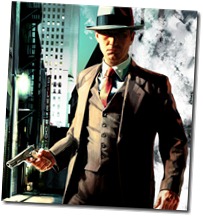 Last weekend I have played L.A. Noire the latest video game created by Rockstar Games and Team Bondi. The game tells the story of LAPD detective and WW2 hero Cole Phelps. It’s set into the late 1940s and shares a lot of tropes with movies from the “film noir” genre.

And as it is often the case playing the video game made me think about the “noir” genre in RPGs. Of course there’s “Thrilling Noir Stories”, the rules-light game I wrote last year. But there are surely more games along those lines.

What would you consider a “noir” game and what are your favorite games of this genre? I also faintly remember that there is a game that combines the tropes of classic noir stories with urban fantasy, but alas I have forgotten the name. Could you guys help me out?

As with all the “Ask The Readers” posts I am very interested in your opinions. Please post your thoughts in the comments below. Please share your favorite “noir” games with us!