Alternate Title – Everybody Needs Some Leverage 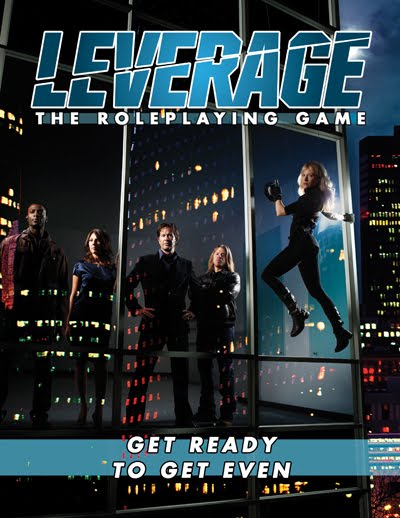 Well, after quite the long hiatus from the world of the internet, I’m back again, this time to finally finish what I started so many weeks and months ago. I finally bring to you my full review of the Leverage Role Playing Game by Margaret Weis Productions. The company that developed the Cortex Plus rules and has brought you such licensed RPG’s as Smallville (which I reviewed here before), Supernatural, and even Firefly, this time brings you their rendition of the Leverage Television Series from TNT.

For those of you not familiar with the Leverage TV show, I’ll try to break down the premise for you: it’s a heist show; I like to think of it as 1/3 Robin Hood, 1/3 Ocean’s 11, 1/6 A-Team, and 1/6th Mission Impossible. If none of those references mean anything to you, you can think of it as a show about a team of specialist, criminal con artists, who work together in order to bring the big evil corporations and rich people of the world to justice for the wrongs they commit against the general, and helpless public. This time around, “the bad guys make the best good guys.”

The Leverage RPG is a licensed take on the TV show. If you understand the premise of the TV show (which by the way is fantastic) then you pretty much get the idea of the game. The RPG itself is a rules light-ish story/character focused game which plays out very much like a TV show would. You play the game in scenes and beats; when the action happens, the beat is where that action goes down.

First, I should say up front that I found that the updated Cortex Plus rules system, which is used in the Leverage RPG, did a perfect job of representing exactly what the Leverage TV show was all about. Character creation is very simple. One of my big peeves with the earlier Smallville RPG was that the character creation system was fairly complicated. This game gets rid of most of the complex web of relationships, which was used for character generation in the Smallville RPG, and instead makes the character creation system very simple. You start by having each player pick the role that they want to fill in the team; there are five roles to choose from: the mastermind, the thief, the hacker, the hitter, and the grifter. Each player has his or her own specialization.  For example, the hitter, as you would expect, is pretty good at brawling. After that, the character creation process doesn’t take very long at all. The entire process is supported by a fantastic group generation process wherein you actually play through a little special type of group adventure which the Fixer (their name for the GM) sets up for you. I thought the whole process was perfectly representative of what you get in the Leverage TV show and in just about every other television show of its type. The system does not stop pleasing at character creation; I found that the system itself seems to work very well. It doesn’t get bogged down in a lot of complex numbers. Virtually the entire game you’re going to just pick up two or three dice and roll against either a fixed target number or against the GM. There are several other very cool bits of the game, particularly the complications system, but those tidbits I will save for you, when you go out and buy this game, which is what I am strongly encouraging you to do. RIGHT NOW.

To move on a little bit with the review, one of the things that I brought up in my Smallville review was that I thought you couldn’t use the Smallville RPG to play a game centered around full-fledged super hero characters. I thought that sort of limited the usefulness of the game itself.  But! I found, through my reading and examination of this game, that I think you could probably use the Leverage RPG to play a pretty successful show based on anything ranging from thieves, to secret agents.

The one aspect of this game that I want to focus on in a little bit more detail is the concept of equipment and gear in the game. The Cortex Plus rules system makes your tools an amorphous game object. Individual pieces of Equipment are not given full stat blocks. Instead, your equipment gives you bonus dice to roll based on how important it is to you and the practical thinking of the GM and player. For those people that get really, really absorbed in all the gritty crunchy details of specific weapon types and attachments (something that you can expect from the more recent versions of D&D as well as games like Shadowrun) you’re going to be a bit disappointed here. But, if you can get past that, this system does something which I think is pretty extraordinary; it allows the game to be played in virtually any time, era, or setting. With the exception of the hacker role, which might need to get a bit of a makeover if there isn’t a whole lot of computers lying around, you could easily adapt the Leverage RPG rules to play the game in a fantasy setting, a sci-fi setting, a historic noir type setting, or even a Renaissance setting.

Really, the game system seems to be that flexible. Because the game system focuses on the characters, the jobs, and their stories, I really believe that the setting is highly adaptable.

If you couldn’t tell, I grew rather fond of this RPG the more time I spent reading and reviewing it. Finally checking out and watching the TV show made the game come alive for me and I seriously think it is worth purchasing. You can use it to run the show perfectly and you could also use it to run a hacker-free version of robin hood, or The A-Team, or Mission Impossible, or even Ocean’s 11 (though having 11 people around the game table might be quite the difficult game to master for…) Finally, if all of this wasn’t enough of a glowing recommendation, the 208 page Hardcover book comes in glorious full color and is crammed to the brink with glorious pictures from the show. I’d buy it just as a coffee table book for a very classy nerd pad (or I might just buy it because I’m such a big fan of Parker). You can get the book direct from Margaret Weis by following this link right here – Leverage: The Roleplaying Game

Also, I should note that they are coming out with a few extra books, outside of the core rules. The first release, Grifters and Masterminds, is set to release in May of 2011 (so right now). The next one after that, Hitters, Hackers, and Thieves is due out later this summer around July. I hope to review those as well… if they aren’t too mad about the review coming out so late. Sorry!