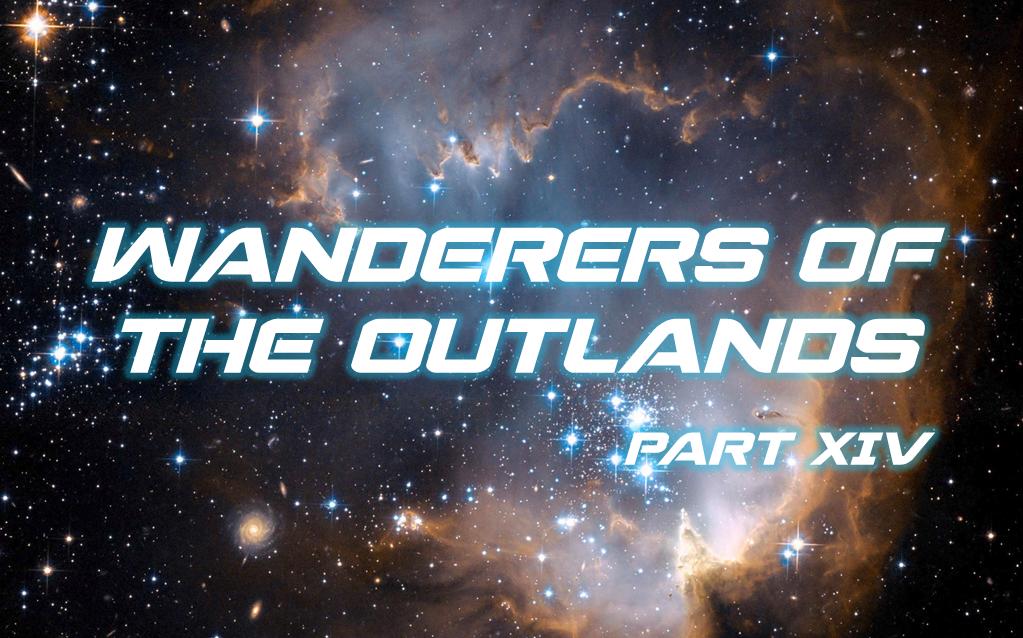 Another Friday, another post in the Sci-Fi Fridays! series, I’m currently sharing the background I’ve written for my Savage Worlds sci-fi campaign. You’ve all been seeing a lot of these materials before my players (well I know some of them read the blog, but not all…), but this week I finally compiled all this material and made copies for my players. The hardcopy version came in at a whopping 245 pages. My friend Daniel Perez, aka Highmoon, suggested I should compile it and publish it. I asked a couple of weeks ago, but I’ll do it one more time, would you be interested in seeing all this material formatted and compiled in a PDF? If there is interest I may just do it.

Now on to part 2 of the fiction piece that serves as a direct introduction to where the first session will begin.

Stories of the Outlands Part 2

Ojore Herrera took of the bucket like helmet and dropped it on the desk carelessly. It bounced of an old data pad, some hardcopy reports, and rolled off into the dusty, cramped and unkempt space behind the security commander’s station. Ojore untied his dreads, damp with moisture, Sarkov Security Forces’ uniforms were designed to intimidate and deter would be criminals, but their design left much to be desired. Helmets were not properly ventilated, the sealing seams for emergency decompression turned the inside into a sauna minutes after donning it. Each uniform was meant to be fitted to its user but budgetary constraints meant new recruits were handed former employee’s uniforms and the fit was less than ideal. At least they protected against must small arms fire, Ojore was thankful for that.

He pivoted the chair toward the comm console and turned it on scanning for the prearranged frequency as soon as it was connected to the NODE grid. Ojore dabbed his sweaty brow with a rag lying about his station. It was small, almost a closet; an afterthought to the building’s design, in the lower service levels of the facility. As the comm system established the connection he looked down at his hands, the black gloves had a few specks of blood and he took them off and tried to rub them out with the rag, knowing full well it would be no good and he would have to incinerate them, probably with the rest of the uniform.

The hands still shook and he looked into the mirrored strip stuck to the wall opposite to the desk. He usually checked his uniform before starting his shift as security commander for this facility but now he looked at himself trying to calm down. His tanned and lined face seemed harder than usual, for a moment he almost didn’t recognize himself. His grey eyes seemed darker, the same color as the uniform. He had served as a spacer during the war, seen little combat, never killed a man before.

The chime from the comm console confirmed that the encrypted audio connection had been established. A cold impersonal voice, the transmission quality degraded undoubtedly by the ship’s distance inside the in-system grid, responded, “Herrera, any problems?” Ojore took a deep breath and closed his fist to calm down. With no image to display the console screen merely flashed a red warning letting him know the connection was tenuous and likely be lost at any moment.

“Marceau was rattled after the Marshall left. He threatened with going to the administrative board, he though they would protect him if they knew about the research and the results.” The lack of a reply convinced him that connection was lost, but glancing at the screen confirmed his interlocutor was still on the line. “Did you take care of him?” asked the man on the other end. Ojore pressed his fists to his temple and closed his eyes, when he opened them his voice was calm, “Yes, Marceau will not be a problem.”

The other man replied, “Good. Don’t worry about the Marshall. She’ll follow the trail of the chemicals convinced this is a heist for the manufacture of black market meds and when she realizes what’s missing there will be no trace of us. Now get with the plan Herrera, nothing to worry…” The console chimed as the connection was lost and Ojore wondered for a minute if that was all he had to say.

Alton toweled off the sweat form his workout and sat before his NODE access port. Despite what his dishonorable discharge record said, he had learned some discipline in the service. He exercised regularly and practiced his katas religiously. Even more so after his left eye had to be replaced with the low grade cybernetic after the little affair at Galard’s Bell. He was determined not to let his little handicap get in his way.

A disrespectful lowlife had asked him why he didn’t have it replaced after a particularly prosperous deal. Sentimental value had been his response, after punching him in the mouth. In Heremod it wasn’t good for your reputation to let a slight like that go unaddressed. But it was more than that; it was not just the sentimental value, but also de modifications.

Alton unplugged the hook up to his external sensors and plugged himself up to the NODE grid. He felt a rush of excitement as the connection flooded his senses. With his good eye closed he groped about for his deck and typed the coding in without looking at it.

He entered his handle, Blackjack, and quickly began to scan the coded messages in the Newsboard of the Journeyman’s Gazette. Heremod being the trading hub it was, and with the strikes going strong, there were all sorts of business opportunities posted in the Newsboard. He made his way to the backroom and sorted through the messages left for him.

One was flagged as priority and after running a security script he studied it carefully. It was from a trusted source, somebody he had done business with before.

Alton considered his options for a moment. This was no simple fence job. This was arranging transportation for black market medication, with no Union patents, a major offense. And his friend wanted to avoid dealing with the Mano Segreto, the Secret Hand the ruthless crime syndicate that controlled the black market in most of Quadrant D. That would be a problem… But people came to Blackjack for solutions, not problems.

He sent back a reply and after some thought there was only one person he could trust with this job. He did a quick search of the supposedly secure UCTA records and could not believe his luck. The man he was looking for was still in system.

He connected to in-system comm grid and established a connection. A coarse but friendly voice answered. “This is the Exeter…” His good eye still closed, Alton smiled, “Cas, this is Blackjack. I have a business proposition for you!”

That’s all for now! Next week I’ll introduce you to the crew of the Exeter. And just so you know, the Exeter is a ship from the Future Armada Series by 0hr – art and technology, check it out on the links. See you then.