Recently I had a tweet exchange with Shaun and Michael about which language we role-played in, and Shaun wrote an excellent post about languages in RPG games here in the blog last week. However our exchange made me think about languages on the other side of the equation, or the screen so to speak, the language we speak as we play.

I am well aware that role-playing is an international affair. While I knew this to be a fact, writing in the blog has confirmed it as I have met people from all over the world. I also know that games have been created, written and played in many countries, but (to the best of my knowledge) they first appeared in the United States of America and have spread to the world. 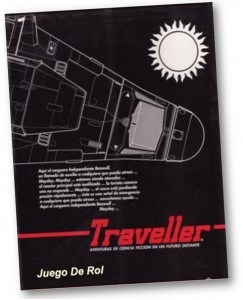 The first RPG games I read where all in English and it was years before I actually saw games in my native Spanish. I became aware they existed, but did not see one for years. I live in Puerto Rico and our socio-political situation means we are very close to the US so it is not surprising that RPG games would become available in English here. When I finally found RPGs in Spanish it was actually cheaper for me to buy them in English. That did not stop me and I have a few Spanish RPG books in my collection, the gem being a Traveller boxed set and the main rule book and some supplements for Aqularre, an excellent RPG from Spain.

Despite this, the majority (99%) of my RPG collection is in English. Shaun asked (and I paraphrase here so forgive me in advance for any mistake) whether we played in Spanish and only used English for certain terms, thus the title of the post: “Spanish, Spanish, saving throw, Spanish, Spanish”. Michael chimed in and confirmed that was the case when he games. Of course in his case its, “German, German, attack of opportunity, German German”. Like I told Shaun, that was not the case for me…

When I game I speak a strange pidgin of English, Spanish and gaming terms. But that’s not exclusive to games; Spanglish is common to certain groups in the island. To put this in some context, in Puerto Rico both Spanish and English are official languages and we are taught English form grade school, but Spanish is our principal language. I became proficient in English from a young age so when I got to read game books they were no challenge for me (well some archaic verbiage usage by Gygax did throw me for a loop), I cannot say the same for all my players, there where different language skills in the group, so I would normally game in Spanish with a smattering of English, including game terms.

As time passed and we got to High School I began to game in English more and more. Games were a way for many of my friends to develop language skills so we began to game in English frequently. It eventually got to a point that we currently switch from one language to another without realizing. If you asked me to tell you which language I used the most over the last couple of sessions I’d be hard pressed to put a percentage on each.

When I think about it I realize I often narrate in Spanish and speak as NPCs in English. Of course knowing more than one language can be put to good use around the table. In my currently on hiatus Pathfinder RPG Swashbuckling campaign I will speak Spanish, with a terrible fake accent attempting to imitate a Spaniard, when and NPC is speaking a certain language, and English for another language, a trade tongue analogous to the Common of D&D fame. In fact players have taken up the cues and do this, often poking good natured fun when someone around the table fails to use the correct real world language for the fantasy language. I know a smattering of Italian and French so I often use some words to represent other languages.

That’s just one example when real world languages can impact your game. I have also used the Google Translate app on my iPhone to translate phases so my players know what they are hearing in another language. I don’t make them figure out what they hear, I tell them, I just use the app so they know what it sounds like. It adds verisimilitude for me, but that’s a very personal taste, I realize not everybody needs those details in their game.

Time to Speak Out with my Geek Out… Role-Playing Games in my case!

“A rose by any other name…” Poetry and Role Playing Games