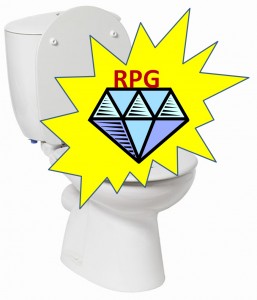 It’s an old adage (and yes I do love that word, I’ve used it often enough) that it’s not the system; it’s the Game Master that makes the role playing experience enjoyable. As a result of recent discussions with friends about which system to use for a possible sci-fi game (a topic I’ve mentioned often before here in the blog), and the wonderful interview Game Knight Reviews did with our fearless leader Michael, specifically question 8 about Michael’s favorite games to play, I’ve been thinking about this a lot…

I have heard variations of the idea, but it basically boils down to the concept that an able (and what THIS constitutes can be a whole other subject open to discussion) GM can make any system entertaining. In effect a good game master can turn a turd into a gem! I have been guilty of saying this myself, often without giving it much though. If we think about it, this is not completely true. There are some systems that are really not salvageable. Be it because they way the rules are written (the intent or the actual use of language) makes them incomprehensible, or the mechanics are so confusing or nonsensical, that no one can really play the game. And I’m not discounting attempts at humor or parody in RPG form, which may not be meant as actual games at all, and can be fun.

Thankfully I think these examples are few and far between and are mostly games someone clobbered together on their own and then inflicted on the rest of us via the wonders of the internet. The majority of published games, be they physical books or in digital form, published for profit or as free games, maintain a minimum of quality that makes them playable and enjoyable to at least some gamers. And I this is the point really, what may be a great game for me, could be a terrible game for you. What makes a great game is so subjective… I think as a community there may be some consensus on certain games, but just visit any old message board or blog and read the heated discussion on editions, game versions and their merits. To quote the late Human Torch (He is still dead right?): “Flame on!”

So once we’ve established that what constitutes a subpar game is subjective, let me approach this from my perspective. I have been a proponent of the GM makes the game idea before, so I’ve decided to put it to the test. I want to pick one of those games I swore I would not play and try to run an enjoyable adventure using them. Why am I being a masochist you ask? Well it’s not so much being masochist, but proving to myself if I can make this work. If what I’ve repeated often enough is just a platitude or something I can do.

So once I have set my mind on this experience all I have to do is find the system to do it. I stood in front of my game collection for a while. I’ve played a lot of games in my life, and read many more. While I have gotten rid of a few, most are still there on the shelf. My first thought was The Babylon Project; the first RPG based on the TV series Babylon 5. I have not actually played the game, but upon first reading it I disliked it so much I put away the RPG based on my FAVORITE TV series and never used it (and I had purchased two copies). But thinking about it, this would not be a good fit for the experiment since B5 would bring with it a whole other set of expectations, most of my players are as passionate about the series as I am, and that might hinder the experiment.

Then I thought of World of Synnibarr, but sadly I got rid of that game. You must be asking, what possessed me to part with that gem? Shortsightedness I guess, but alas it’s not available.  So I may have to settle for the next best thing, RIFTS!

Ok before you cry foul, I did say this represented MY personal taste. I am sure there are plenty of RIFTS fans out there who enjoy the game and continue to play it. Good for you… I played them all, starting with Robotech as a teen and young adult, but along the way realized the system was needlessly complex, and not in a good way, for me and my group. I stopped playing RIFTS and Palladium games long ago. Despite all controversy and the things you read on the net, when I briefly met Kevin Siembieda at Gen Con 07 he seemed like a nice enough guy, and I wish him continued success with whatever endeavor he undertakes.

RIFTS is a game we stopped playing long ago and which most of us agrees is not what we expect form a game. So this might be the perfect rule system to try and prove my point. I plan on running a RIFTS adventure with my players, without telling them and see if they enjoy it…

I know there are flaws to my plan, maybe RIFTS has too much baggage, or they will figure it our t right away and simply throw their hands up, or worst of all I am conceited enough to think I am a good enough GM to pull this off! This is just in the planning stages but I will keep you informed.

So in a way this is the turd into a gem challenge… (No disrespect to any specific game!) Who’s with me? Who’s willing to choose what they think of as a subpar game and try to run a great adventure with it? Who thinks I’m delusional, that there is no such thing as a great GM making a bad game good?

PS – While writing this post I discovered the website of Raven c.s. McCracken, creator of the World of Synnibarr, in his bio he pokes a little bit of fun at his creation! Enjoy…