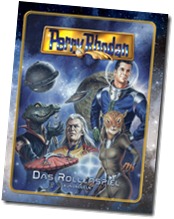 With the majority of games I bought over the years I was quite happy with. Of course not every game was up to my expectations but in most I didn’t feel totally disappointed. Heck, even though I criticize D&D 4th Edition from time to time, it was far from the most disappointing game I ever bought.

This questionable honor falls to the German roleplaying game “Perry Rhodan – Das Rollenspiel” which has been released in 2004. In order to understand why this game was such a major disappointment I have to start back in the early 80s.

As I already mentioned in a recent post, I have been a Science Fiction fan since I was a kid. One reason is that both my parents read quite a few SF stuff back in the day. My dad has been reading Perry Rhodan, which is supposedly the world’s largest SF series, pretty much from day one. So it’s no surprise I started reading the series, too. Today I own about 65 hardcover books, several paperbacks and hundreds of the Perry Rhodan pulp novels, and a few merchandise products including two space ship models. I think you can call me a Perry Rhodan fan.

When I’ve read about plans to release an official Perry Rhodan roleplaying game, I was quite excited. Even when I heard that it should use a modified ruleset of the German RPG Midgard I was not expecting to be disappointed. A friend of mine always praised the Midgard rules and I had no reason to question his judgement. If I knew more about said game, I would probably have been quite wary at this point.

Midgard, which has nothing to do with Norse mythology or the upcoming setting by Wolfgang Baur, is a classic German RPG design from the 80s. Which basically means that it’s mostly simulationist, with overly complicated rules and a lot of abbreviations. While it might work for a traditional fantasy game it doesn’t work that great for SF and the style of the rules doesn’t fit the setting at all in my opinion.

From a production quality standpoint the Perry Rhodan RPG was pretty good: Hardcover book, clear layout, very nice artwork created by the same artists that create cover art for the novel series, good printing and solid binding. Alas the contents were not what I had hoped for.

The 344-paged book contains only a few pages about the setting. If you haven’t read the series for years it’s almost impossible to get a feeling for the Perry Rhodan universe with the core rulebook alone. On the other hand, the rules (especially the combat rules) almost take up the rest of the book. As you all well know I prefer games with less emphasis on rules than that, so this put a big damper on my excitement. To put insult to injury the core rulebook only contained stats for two (!!!) spaceships.

Even though I wanted this game to be great I quickly became highly frustrated with it. And it didn’t really surprise me when the publisher announced in December 2010 that they don’t intend to renew the license. So the Perry Rhodan roleplaying game officially died after 6 years and about 8 released products. I’ve lost interest in the game long before that.