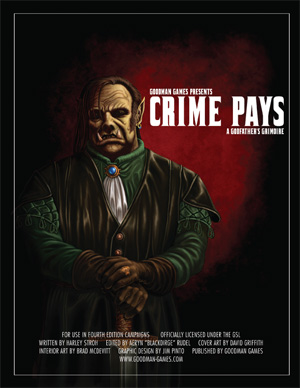 Crime Pays adds an extra level of play to the standard D&D game through a level of play which steps back from the direct, hands on activities of the godfather himself and looks at the actions of his mob as a whole. The Godfather commands his family of rogues, thieves, and thugs across his territory. This style of play adds something very interesting and strategic to the game; I could see myself sitting behind a chessboard managing the movements of my many pawns and generals as I play out the mob turn. Although the rules in Crime Pays add this extra domain level, they don’t try to replace the actual roleplaying side of the game with this management side of things. Although most of the mob based stuff you get to do with the rules are very cool, and offer a fantastic amount of story and plot based elements to add content to your campaign, they don’t tend to be so profitable, even across the many tiers of play. The consequence of this being that you will still need to actually roleplay your character. Sorry! No easy mode for you.

I don’t want to just repeat all of the things on the back of the book. Crime Pays really does have everything you need to run your own Mob. When I say everything, I mean everything. The only thing this book doesn’t have is any more feats or magic items that you can throw into the never ending stack of feats and magic items that already exists, never to be used again. The quality and quantity of the varied content in this book is gnarly. Instead of talking about all the cool stuff in the book, which could take ages, I want to just breeze over my top five – I’m actually going to do this in countdown order; skip to the end if you want to know the big #1.

#5 – Crimes
What would a mob be without all the dirty jobs. Crime Pays offers a great section on all the different crimes that your mob can and will likely commit during its reign. The section is well organized (alphabetically) and each crime is given statistics in a manner similar to skill checks/skill challenges. It is a fairly all inclusive section as well, containing everything from bribes to smuggling.

#4 – The Made Men
What would a mob be without the family; every mob is made up of a group of skilled made men. This supplement offers a terrific wealth and variety of different made men who act as the muscle for your mob. There is even a great table for rolling randomly and finding out what made men you hire, if you want to work it out that way. I particularly liked how deep this section went; I didn’t expect to see something like a Junkman or a Beggar Master make the list, but they certainly have their place here in Crime Pays.

#3 – Random Events, Law Events, and Underworld Events
Crime Pays offers a plethora of story based events that you could use even if you are not running a strictly mob campaign. In fact, a lot of the random law and underworld events tables would be an awesome addition to any campaign set in a major city where law enforcement clashes with seedy side of the city. Even if the characters in your game aren’t directly involved in this world, having events moving along in the background could offer some very cool story possibilities that might get in the way, or perhaps even accelerate a city based adventure that might have nothing to do with mobs or their dealings.

#2 – Chapter 5: The Crime Campaign
Running a Crime Campaign might be something very new to a DM. This chapter offers great advice on how to run it right. I have never tried running a campaign like this, but I think, after reading this section of the book, that I would be prepared enough to try it.
OK folks, what you have all been waiting for, my favorite part of the book…

#1 – The Vulgar Tongue, A Dictionary of Thieves’ Cant

OK. This appendix is awesome. At the end of the book, the author was nice enough to provide an entire dictionary (almost 4 pages long) entailing all the special, unique dialect which is specific to thieves and rogues. This section of the book is simply fantastic. It offers the potential to add SO MUCH flavor to the actual roleplaying experience around the table. I will have a copy of this appendix in my DM’s binder and it will be at every single game I ever play in, forever! Awesome. I would like to see a dictionary like this in every book or supplement I see for the rest of time. If somebody made a dictionary, an actual dictionary, like this one, I would probably buy it.

So, if you want my opinion, buy Crime Pays. It’s quality and worth the $21.95. You can get the PDF version of this book at DriveThruRPG for $9.99, too. Whenever you find yourself needing to make an offer that your player’s can’t refuse, pull out this book and go to town.

Ask The Readers: Tell me about Gamma World!