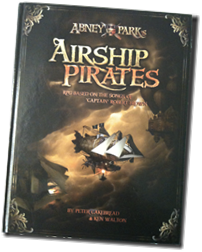 A couple of days ago I found a mysterious package in mailbox. I opened it and found a copy of Abney park’s Airship Pirates courtesy of Cubicle 7. Some of you may know that I also preordered a copy directly from Abney Park in order to get it signed by Captain Robert Brown himself, but it’s still on its way to Germany. Hopefully the cargo plane carrying my copy didn’t crash into a time-travelling dirigible…

I have read most of it already and I have to admit the wait was worth it. Cakebread & Walton, Cubicle 7 and Abney Park’s Robert Brown did a great job with that game. The setting is quite original and set into a bleak future and not into the Victorian age, as you might expect with a steampunk game.

The back story is that Abney Park’s plane crashed into a time-travelling airship a couple of years back while on the way to a gig. They decided to use the airship to travel into history and fix things that have gone wrong. Alas this lead to unforeseen consequences.

To cut a long story short: the future is messed up. Most people live either encaged in Neovictorian cities controlled by the Emperor Victor Hypocrates III, in the Neobedouin tribes of the North American wastelands or in flying cities always prepared to flee from the Imperial Navy. The players are the crew of a pirate airship travelling the skies and trying to make some profit.

The rules used are based on Victoriana 2nd Edition’s Heresy Engine and are pretty close to the one’s in Dark Harvest, which I reviewed a while back. The book even gives some tips on how to combine the three settings.

Recently I have checked out quite a few steampunk RPGs, but Airship Pirates is definitely my favorite. It has an original setting, pirates, airships, automatons, great artwork and just looks totally awesome in all aspects!

My edition of D&D