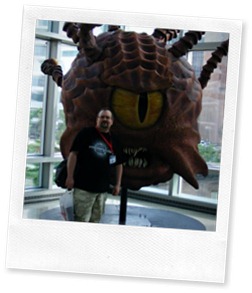 Recently it was announced that Monte Cook is working for WotC again. And of course the rumors that they are already working on D&D 5th Edition flared up again. But that’s not what I want to write about today.

Let me start by a disclaimer: I haven’t been a fan of D&D before third edition and while OD&D in form of the retro clones has a certain charm for me, there are many other games I prefer.

So while I would probably base my “Stargazer Edition” of D&D on OD&D, I would include a lot of the changes from D&D 3rd Edition. Or let me rephrase that. I think I would take D&D 3rd Edition and remove all the meat from the bones so that something as light as OD&D or perhaps Microlite20 remains.

At first I would remove the feats and streamline the skill list. The D&D 3.5 skill list was already a great improvement about the one in it’s predecessor. When I think about it, the way the skill system works in D&D 4th Edition is not so bad. Your skill rank is always half your level plus 5 if it’s one of your “trained” skills.

As the next step I would get rid of attributes but keep the attribute bonuses. In my opinion the attributes in D&D 3.0, 3.5 and 4.0 have just been kept for nostalgia’s sake. It worked great in games like Mutants & Masterminds and True20, so why not in my “Stargazer Edition”.

The three Saves and the Base Attack bonuses actually worked well enough, so I’ll keep them around. See, it wasn’t so bad, it almost didn’t hurt.

Ok, let’s start slaughtering some sacred cows now, let’s change the way armor works. I always didn’t like the idea that armor makes you harder to hit instead of reducing the damage your character takes. So let’s fix that. This is actually done quite easily. Each character gets a Defense value which is 10 plus your Dexterity (remember, we replaced the attributes by their bonuses). This is what your opponent needs to roll to actually hit you. Armor worn reduces damage and heavy armor may even reduce your Defense making you easier to hit.

The next sacred cow to be killed are classes. Instead of classes I would prefer the players to be able to pick and choose from various background options. These can grant you access to certain abilities, magic etc. – they are basically your build-your-own-class toolbox. This allows for much more organic characters.

Magic is another touchy subject. I never was a friend of Vancian magic and I didn’t like the way D&D 4th Edition made use of Powers either. I would probably try to design a spell-point based system or follow an even more radical approach.

Back when I was still in school I read many of the Dragonlance novels by Margaret Weis and Tracy Hickman. In these novels casting magic always drained sometimes even hurt the caster. So why not design a system in which spellcasters use their hitpoints to power spells? Of course this limits the power of magic and might feel out of place in high fantasy settings but I like the idea a lot.

My edition of D&D would probably use feet and yards instead of squares and move away from tactical miniature combat. And instead of including rules for every situation I would prefer to keep things light and encourage GMs to come up with their own solutions.

Last but not least I am actually not sure if levels are even needed. But I might actually keep them around just for nostalgia sake. Yes, even I can be nostalgic.

The result of this thought experiment, the so-called Stargazer Edition of D&D would probably almost be unrecognizable for some, but I believe it would still retain a lot from D&D. I haven’t actually started working on something like that, but it’s one of those ideas that crop up from time to time again.

So what do you think about my ideas. Am I sacrificing too many sacred cows? Am I totally nuts or do you believe I am on the right track?

Disclaimer: No cows (sacred or otherwise) have been harmed during the production of this post.