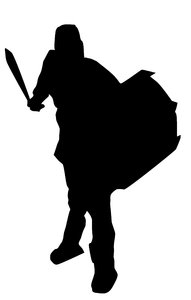 Just as I am more of a lover than a fighter (and no I’m not giving you any references so you can confirm this, you better take my word for it), I am more of a Game Master than a Player. I’ve spoken about this before, but it boils down to the fact that I actually enjoy telling the story, weaving a yarn along with my players, more than being just one of the protagonists. It was the very first thing I did when I role-played and I fell in love with it from the very first time.

That being said I have enjoyed sitting on the other side of the screen form time to time. Since I usually talk about being a GM I thought it would be nice to turn the table and talk about being a player for a change. This is not a post about an NPC (although you could certainly turn him into one) but an actual character concept I developed for a game.

One caveat, I remember the character concept but the exact moment it materialized is lost in time. I recall the concept, not all the fiddly bits of how it germinated, so I apologize to my friend Luis who was there when the concept emerged if I mix up the memories. This is the story how I remember it.

Back in the days of AD&D, 2nd edition I believe, we were preparing for a new campaign. We were supposed to roll up wet behind the ears, young, potential heroes living in an out of the way village, whose life would change when adventure came their way, in the end, the typical cliché. As much as I wanted to play this campaign I balked at the idea of another young farmer or blacksmith’s apprentice turned hero. I began to think, what other option do I have? And this is what I came up with.

I decided to play the town’s old drunk! The permanent fixture in the bar night after night, slovenly, perpetually inebriated, telling stories of past glories and conquests no one believes. Little respected, often derided, willing to humiliate himself for a drink. No one takes his stories seriously, but little do they know this old man was once a great hero!

I had not fixed on just what his past glories might have been. Perhaps he was once a powerful adventurer that amassed great wealth, maybe a soldier of renown who lead armies to victory and was hailed as the savior of a city of small kingdom. Knowing specifically WHAT he did was not necessary; it was enough to know he wasted his money and drank himself to poverty and disgrace. Leaving behind the people and places that reminded him of his failures he simply wandered off, forgotten and dispossessed.

Along the way he had lost the skills and vitality that had once made him a great warrior. As the campaign began, when this sleepy little town would face dangers unheard of in a generation (I was not sure what it would be but it only made sense), would this broken old man rise up to the challenge?

My idea was to roll up this character as a 1st level character, representing not so much his inexperience but more his lack of practice, the ravage of time on his body, the effects of drinking on his health. Since AD&D had rules for older characters I asked if I could modify the character for his age. Of course it would mean a reduction in his physical attributes, but his mental attributes would get a boost.

I wanted to play him as a broken man, with little self control or sense of worth. Faced with hardships and new challenges this would be his chance at redemption. Would he make it? That was part of the challenge. As I envisioned it, as he went up in level, it would represent him regaining his abilities thought practice, honing his skills back to the way they used to be. Finding out if he would make it or would fail along the way would have been half the fun!

I would love to make him for the Pathfinder RPG, Savage Worlds or even Warrior, Rogue & Mage… I can see him is three stages, as a beginning character, old broken inexperienced because he has lost all he was. As a mid level character, having recovered some of what he was, not as strong or nimble as he was in his youth but wiser, smarter but still hunted by his vices and doubts; and then as an experienced character, a warrior living his last years with dignity and the skills that once made him great, fighting the good fight, perhaps for the last time…

How would you stat Adoph? I would love to see our readers take on the concept, for any system you’d like to stat him up, any takers? You can either post him in the comments or send it via e-mail at sunglar@hotmail.com

My thoughts on the RPGBloggers Network