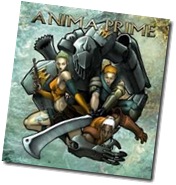 Yesterday night I was browsing RPGNow in hopes of finding an interesting RPG I haven’t heard about yet. With thousands of titles on the site, it’s actually pretty easy to find stuff I haven’t seen before. What finally caught my interest was a game by the name of “Anima Prime – Steambots and Mega Swords”. Obviously the author of the book, Christian Griffen, set out to write a pen & paper game inspired by the Final Fantasy series of video games as well as Avatar: The Last Airbender and similar anime shows. It was just $10 and looked like I could like it, so I bought it.

While flipping through it I noticed that the game has been licensed under a Creative Commons Attribution-Share Alike 3.0 US License. That means you can take the rules and design your own game around it and even sell it as long as you share it under a similar license and give the author of Anima Prime proper credit. You can also share material you wrote for Anima Prime under the same conditions. That’s always nice, especially because CC is much less complicated to work with than the OGL. There’s also a free edition available at the official site that comes in a simpler layout and without the artwork, but aside from that it should contain the same content as the paid version.

From what I’ve seen so far, the rules are not too complicated and the dice pool system it uses seems to work fine. Combat is a bit more elaborate and allows the characters to perform fancy moves, summon “eidolons” and there are “soulbound weapons” at the characters’ disposal.

The artwork and layout are pretty nice, especially if you are in the manga style. The 196-paged PDF also comes with a setting for you to play in, but the rules also contain quite a few tips on how to create your own setting.

All in all Anima Prime looks like a fun game. I’ve always wanted to run a game in a Final Fantasy-inspired world and it seems as if Anima Prime could handle this perfectly. If you are even remotely interested in the genre, you should at least check the free version out.