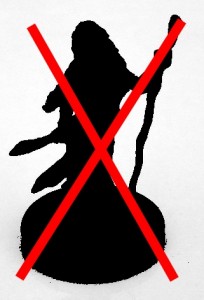 When D&D 4th Edition was new, one of the first complaints was that it turned D&D into a miniature game. I disagreed and I remember that the post I wrote about 4E myths provoked quite a few unfriendly comments. I have to agree that some classes like the warlord work better when you can visualize where the opponents and the allies are located , but it’s not impossible to play the game without using miniatures or even a simple map drawn on scratch paper.
This morning I discovered an excellent post by Mediocre Tales about this subject:

Mearls scores big with this post, which suggests how to play 4ed without minis.  While this almost exactly maps to how pre-3ed D&D would handle this situation, I feel like there is room to new-school the old-school.  (If the following idea sounds terrible to you, just blame all those indie rpgs I’ve been reading lately.)

You should also read the post by Mike Mearls who came up with that idea. I haven’t run D&D 4th Edition as a DM yet, but this is something I will probably try out.