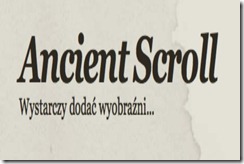 Fellow RPGBA member AncientScroll.pl is currently running a IndieGoGo fundraising campaign in order to get the funds to make the switch to English.

The Polish-language site releases free to use RPG adventure ideas on a regular basis. At this moment about 100 adventures are freely available for RPG fans to download and use for their games.

They now decided to make the switch to English in order to provide their material to a much broader audience. But in order to do so they need to raise enough money to pay for professional translators to keep up the quality.

Supporters will not only get satisfaction that they supported the RPG fan community but also all ebooks currently published by the Ancient Scroll for free! Don’t worry, these are already in English. In addition to that you’ll get your name and link in their partners section.

If you want to learn more about this, please check out the official campaign page.