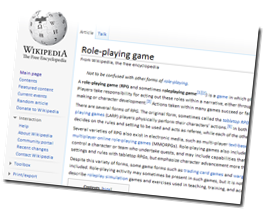 I don’t remember ever seeing a boardgame, videogame, book, movie DVD or any other entertainment product to first explain me what it is. But in the case of roleplaying games there almost always a small section that explains what the author thinks pen & paper RPGs are.

Recently I started thinking whether this was actually needed. There are actually only two kinds of people out there who might pick up a roleplaying game: the ones who have played RPGs before and the ones who haven’t. Explaining the first group what a roleplaying game is, that’s just silly. And what about the second group? How likely is it that someone picks up a game that he knows nothing about?

In my WR&M game I told people to ask their geek friends or look it up on Wikipedia if they don’t know what a roleplaying game is. But again, is this really needed? Of course there are people out there who buy a PC game and are surprised it doesn’t run on their DVD player. Or there are parents and grandparents who buy stuff for their kids and grandkids without doing any research before they shell out the bucks. But is this really the majority? And do you really believe these people actually read the book?

Things are actually made worse by the fact that everyone tries to come up with his or her own definition of what a roleplaying game is. A lot of effort is wasted on these definitions (and more often than not even gamers argue about what RPGs actually are) instead of really informing the public about our hobby.

I think instead of sticking to these “What is a roleplaying game” sections we really should make an effort to share our hobby with a larger audience. And with the high popularity of MMORPGs it shouldn’t be so hard to explain today’s youth what the roots of their hobby are, don’t you think?