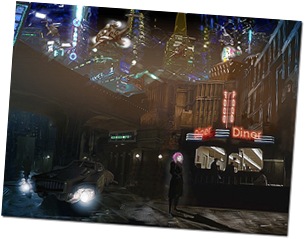 Technoir, which I helped back on Kickstarter in 2011 immediately came to mind as a game perfectly suited for this task. But there are quite a few other Cyberpunk RPGs out there like WYRED, based on my Wyrm System, or Cyberpunk 2020.

The only cyberpunk-ish game I’ve played for an extended period of time was Shadowrun. We started with the 1st Edition back in the day and quickly moved to the 2nd Edition when it came out. I eventually picked up the 4th Edition but never played it. I am not too happy with the updated timeline and the rules are in my opinion not that great. I also would love to play a pure cyberpunk game and not something that mashes up Cyberpunk and Fantasy.

It’s hard for me to pick my favorite Cyberpunk RPG. Technoir looks pretty awesome, but I haven’t played it yet. Shadowrun is the game I played the most (and quite enjoyed it back in the day), but nowadays I find the rules too cumbersome and the updated timeline is not really my cup of tea. Perhaps I am not the only one who feels that way. Catalyst Game Labs recently released a supplement that lets you play in 2050 using the 4th Edition rules.

So what is your favorite Cyberpunk roleplaying game and why? It would be great if you could share your thoughts in the comments below.

D&D 5th Edition is much better than I anticipated