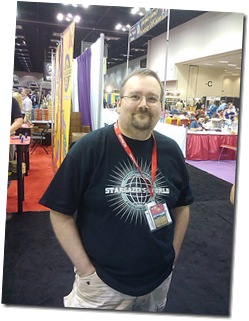 Today, we’re not going to talk about games. Well, not directly. Michael offered me the coveted opportunity to invade his space, and post whatever I wanted to to celebrate the fourth anniversary of Stargazer’s World. Y’know? The site you’re on right now? This really great website where he shares his ideas and hopes and commentary about the world of gaming and, more specifically, the world of roleplaying games which continues to grow in strange and wonderful directions every day.

Naturally, I told him I was honored, and asked when he needed this. Y’know, since words are largely my stock and trade, they are something I need to write, regularly, to keep the lights on around Reality Blurs. He asked if I could get draft this up today, so, basically, right away. (Or, in this case, write away!) Normally, I would need more notice than none, but I’ve been put in more compact time frames, and am able to crank words out as the situation demands. Or, in many cases, I would gracefully decline. The requests to post on other people’s websites increases inversely with your necessity to do them. Life is full of perversions like this. If you’re young, get used to it. If you’re not, then you know I’m telling the truth.

As the guest, I asked what he wanted me to write about. I can write about most anything (between outright fictions and fabrications to real world stuff), and make it at least a tad bit entertaining if not somehow enlightening for you, the gentle reader. He half-jokingly suggested I write about him. I thought that was a grand idea. It is the anniversary of his website after all. He graciously said I could talk about other matters as well, such as my processes and promote products, but I don’t feel this is the place for that. I will suggest you check out the Reality Blurs website if you want to read about the trials, tribulations, setbacks, and successes of my company.

Four years. Wow. Michael’s been at this for four years. Which, if you think about it, is like a million internet years at least. Right? I remember having only vaguely been familiar with the site he started on August 4th of 2008 when I met him at GenCon. He was a pleasant fellow with a thick German accent whom I met after one of the Savage Worlds panels. I was tired from a late night and, as I recall, Shane Hensley asked the audience to provide us with genres and we’d come up with a setting idea. I was given the stumper of Regency Romance, a Mi-Go artifact, and the Mariana Trench, so I mind was a bit exhausted. He asked about setting up an interview with me during the show. I said absolutely. And it did happen, but I’ll get back to that…

And that’s where I’m going with this. Michael is tenacious, friendly, and charming. He’s put together something really special here. You can tell he and his crack crew (real live people rather than just him and his drive) care about gaming on a fundamental level. They aren’t here to rake in millions of dollars (that I’m aware of), but provide the community a great service by sharing their love and insight of the hobby. The words you read on this website are valued for their insight and integrity and, most of all, as honest opinions and assessments. Stargazer’s World is one of the first places I turn to find out about a game I’ve not yet played. Why? Because it’s likely that Michael may have already played it or, at least, read it and provided a critical analysis. This website is rich in trust currency, and you can trust the crew here to be largely spot on about their insights. (Caveat: I can’t say completely spot on, can I? What if they don’t like something I do down the road? Remember: always have an exit strategy.)

I’ll end with a more personal anecdote, a light touch upon the shoulder of the man who started up this site, Michael Wolf. I mentioned where we only got to speak briefly that first chance meeting? We did eventually get to talk later on, and it was a delightful conversation. Subsequent to that, he and I chat quite regularly from across the pond via instant messaging, and I’d have to say we’ve forged a friendship beyond just gaming. That being said, I trust his ethics and, if we grow derelict in our duty as designers, he shall point them out in the most gracious way possible.

Until next time, I bid you, dear reader, adieu!

P.S. If I misremember any facts, it’s because I am largely a purveyor of fiction and reality blurs, after all.