RANT WARNING! The following post contains hyperbole, conjecture and unfounded opinions. Read at your own peril.

These days there is a lot of speculation about the death of the pen and paper RPG industry. Those who see the glass half empty make some excellent points about units sold and speculate whether RPGs remain a viable business. Those who see the glass half full proclaim that there are ups and downs and that as long as there are people playing there will be role playing games.

I’m a glass half full kind of guy myself and instinctively try to see the best of any situation, so count me among those who think RPGs will survive the current slump in sales, if there is one. Mind you I’m not challenging the analysis of the numbers out there. I do not work in the RPG industry, nor do I make any money from it. I am just a fan writing my thoughts in a blog. I did use to work at a comic/gaming store fifteen years ago but that was ages ago, and the way we interact with our sources of entertainment has profoundly changed since then.

I won’t use any of the newfangled terminology out there but suffice it to say the publishing landscape has changed profoundly over the last ten years, so has gaming (electronic or otherwise), and how we spend our leisure time is something our own parents find weird. Since RPGs fall into all those categories I believe it is inevitable that we would see some profound change in our hobby. 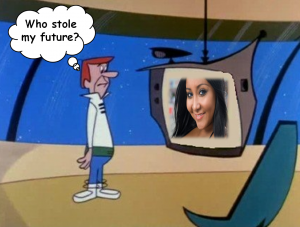 In the lasts few decades we stopped being passive receivers of entertainment and began to interact with it. When I was growing up there were three TV stations and I had to see whatever they were showing! I remember as a kid turning off the TV just before a show ended (to the endless complains of my friends) and then playing out the ending as I believed it would happen. Now we have hundreds of channels and every conceivable niche (well almost everyone) has a TV station. Are you into food, travel, cartoons, crime or soaps? There is a channel for you!

The internet has even broadened that offering, fans make their own versions of shows they love and interact with creators and other fans in ways we only dreamt of before. I grew up expecting the future I saw in The Jetsons but ended up with something much more amazing (Except for Jersey Shore! What is up with that?). 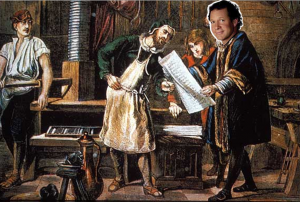 I really believe we are in the midst of a profound change in what is traditionally classified as media. Blogging, digital publishing, POD, e-book readers, these things are restructuring a landscape that resist change. People are always afraid of the unexpected, much more so when the changes are ongoing an unlikely to stop in the near future. We are in the midst of a revolution not unlike the Industrial revolution, but this time it’s the revolution of information. Actually it has more in common with Gutenberg’s Invention of the printing press, who knew that Police Academy guy had it in him!

We just don’t sit back to entertained; we want to control it, to make the choices, to interact with our entertainment. I think pen and paper RPGs were part of that change. You no longer had to read about the fellowship taking the ring to Mordor, now you could actually tell the story, ride the eagles and get there sooner (sorry I know it’s been done to death, but it DOES make sense!). RPGs were part of a change, not the only influence mind you, but an important part of realizing WE could tell the story. It happened right along the development of electronic games, and as an example of the influence of RPGs, see how many of our electronic games integrate ideas originally develop for pen and paper games. If there had been no role playing games to begin with, the world’s most popular MMO would be a beautifully rendered version of Pong. I’m not claiming this happened in a vacuum and that RPGs are the sole influence, but the organic interaction of all these elements (and I said I’d use no fancy words) is part of the evolving landscape of games.

Are games selling in the volume they were in the heyday of the 80’s? I guess not. But there is a much more fractured market for entertainment. It used to be we would go to the theater to see a movie and then wait for it to be shown on TV. Now the movie is available in the cinema, and on a DVD in a box in the gas station, or we can get it delivered home, via the mail or through our TV, game console or online. Likewise the options for games used to be cards, dice, board games and then RPGs. Now we have game consoles, card games, games in our phones, and don’t get me started on smart phones and tablets!

Change is happening all around us and it won’t be over for a while. Maybe in twenty or thirty years we will have a new media landscape that stabilizes; although I doubt that at the rate technology changes that will be the case. Change will be the new status quo.

What does all this have to do with pen and paper RPGs? Well right now RPGs may not be a viable business for everybody, and I admire those that have properties they want to see grow for branching out into other media. RPGs are a niche market, always were and always will be. Games are not selling the same number of physical books you say, well there is a slew of new digital products coming out. Are they all of the same quality as physical books? Well that is debatable.

Barriers to publishing meant some of the less than stellar stuff never saw the light of day and you expected a certain level of quality, but now if you have the right software you can put your stuff out there. This requires that the consumer be a little more savvy, and guess what, the same tools that allow the ease of publishing also allow for the buyer to be better informed. And this is not a problem for just pen and paper RPGs, but for music, fiction and movies as well. And it is all so subjective, one person’s junk may be another another’s gold.

And hey, if you disagree with the naysayers, don’t get all riled up about it. We don’t have to agree, but neither do we need to rip each other’s heads over it. Why can’t we all just get along? I don’t think pen and paper RPGs will return to the “glory days” of old. But the hobby will not die anytime soon, it will just be different, and that’s fine for me.