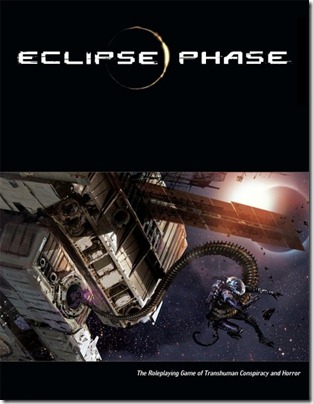 If you are even remotely interested in Science Fiction roleplaying games, you might have heard about Eclipse Phase by Posthuman Studios. It’s set in a future where being human is quite different from what it used to be. People’s mind can be transferred to clones or android bodies. Body modification by surgery, bioware or cyberware is common. If you are rich enough, even death can be avoided.

The system employed by EP is a variant percentile system with some twists, which is quite easy and streamlined. But what sets the game really apart is the fact that its text and artwork are licensed under a Creative Commons Attribution-Noncommercial-Share Alike 3.0 Unported license!

So, you are free to copy, share, alter and remix the rules. You want to use the Eclipse Phase rules to write your own fantasy game? Feel free to do so. You want to use the background setting in conjunction with a different rule set and release it on your own blog? No problem! As long as the use is non-commercial and any derivative work is released under the same license, you’re fine.

This is unprecedented for a commercial game like Eclipse Phase. Usually game publishers and designers are extremely protective of their work. But the people who created Eclipse Phase share the PDFs on their own blogs for free. Or they uploaded the books to Bit torrent sites like The Pirate Bay or Demonoid.

And all this is actually paid off for Posthuman Studios. Sales of the printed books (and even the PDFs) are good and they already plan to release their next game under the same license. In a time when other companies stop selling all digital copies of their products, Posthuman Studios is successful by giving their stuff away for free.

The reason why Eclipse Phase is a commercial success even though it’s available for free is two-fold. First and foremost it’s a good product. And people are always willing to pay good money for quality. The other thing is that people appreciate that Posthuman Studios is sharing their game with the community. And so it’s only fair that this act of philanthropy pays off for the publisher in the end.

So, if I was able to whet your appetite, go to Rob Boyle’s blog, download the PDFs and read them. If you like what you see, support their work and buy a copy of the game.