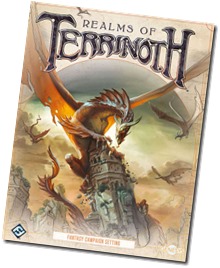 On Friday I finally had the chance to play in a Genesys game. My friend Sebastian ran an adventure set into the Realms of Terrinoth for us. Since it was meant as an introduction to both the mechanics and the setting, we decided to pick our characters from a list of well-known characters from the settings. Since I already played him several times in Descent, I picked Leoric of the Book, a somewhat arrogant mage who is on a forced sabbatical from the university of Greyhaven.

In the game our group of adventurers were on their way to Greyhaven, when we stumbled upon a group of bandits pillaging a farmhouse. After a very short exchange of unpleasantries and the casting of a very effective attack spell, the bandits surrendered and we got to explore the farmhouse. It turned out the inhabitants were killed. One victim had its neck broken, while the others had their blood drained. The only visible wounds were two small holes on their necks. Since we all failed our Lore roles miserably we made up the theory that someone must have used some kind of barbecue fork to skewer the victims. We then found tracks caused by a two-horsed carriage, which we followed until we came to a landslide which blocked the road. A guard told us about a detour we could take and also remembered a carriage going the same way, carrying at least one driver, a guard, and a female noble. 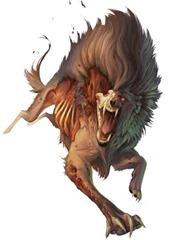 We followed the trail until we reached a roadside inn. We quickly realized that a) the stablehand has been missing since the carriage arrived and b) that the carriage was about to leave again, which was surprising because people usually don’t travel at night. We then found out that the noble riding that carriage was from the house of Farrow from Nerrekhall, a town with a history of demon worship. Some patrons also heard strange noises and noticed a weird green light coming from the noble’s quarters. Immediately after the carriage left we searched the rooms and found – to no one’s surprise – the dead stablehand, killed in the same manner as the farmers.

A chase ensued and eventually we had to fight not only the noble which was quite proficient at magic, but also a couple of barghests. We barely survived but the horse-drawn carriage was able to escape. But we’ll get her next time! 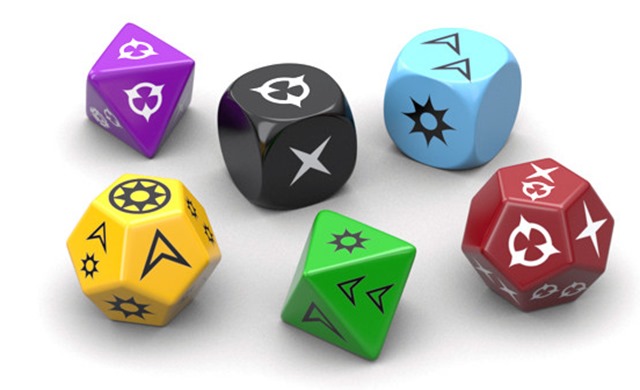 All of the players were already familiar with the mechanics since most of us have about thirty sessions of Edge of the Empire under our belts. The differences between the Genesys system and the mechanics used in FFG’s Star Wars line are pretty small. Reading the dice and interpreting results has pretty much become second nature to most of us.

I particularly enjoyed the magic system. It’s extremely versatile but still easy to use. Each type of magic (Arcana, Primal, Divine, etc.) has a number of basic spells (like Attack, Barrier, Heal, etc.) which can then be modified to one’s heart’s content. You can add various elemental effects, increase the range, affect additional targets, et cetera. Modifying spells usually adds to the difficulty of the casting roll, but there are magic items and talents who alleviate that issue. We mostly used the spells created for the characters, but the great potential of the system was obvious.

Overall our first session in Terrinoth went exceptionally well. The GM did a solid job even though he hasn’t worn the GM’s mantle that often before. Because of the usual scheduling issue we probably won’t get to play before next year, but I am already quite excited to continue our adventures!