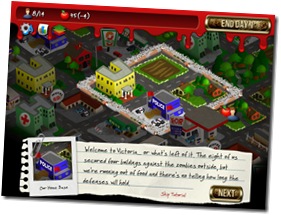 On the weekend I downloaded a game called “Rebuild” onto my iPad. In this game you reclaim a city one square at a time after a zombie apocalypse. The game has a few roleplaying elements and allows you to create your main character at the beginning of the game. I played the game for a few minutes then I had an idea: why not use some concepts from strategy games to make running certain kinds of roleplaying game campaign easier?

The basic idea is that like in the iOS game “Rebuild” you start with a small party of adventurers/survivors/whatever in a mostly unexplored area. This might work best with a post-apocalyptic scenario, in a points of light campaign or a game focused on exploration. Instead of drawing a whole map before starting to play the GM (with or without help of the players) creates map tiles (you can just use index cards though) that contain all the needed information like what kind of area it is, what kind of resources can be found there, is there any opposition or perhaps even future allies? The map tiles are shuffled and put into a stack.

At the beginning of the game a few tiles are put face down onto the middle of the table. The players then chose one map tile face up, that’s where their base of operation is. After that all adjacent map tiles are turned face up. This is the initial campaign area.

The players then can decide what to do next. In the settings mentioned above, scavenging for resources, exploration, recruiting allies etc. or fighting enemies could be among the possible missions. The players decide what they want to do and who is going to attempt that mission. The one player (or NPC) with the lowest skill rating for the task at hand then makes a roll. The difficulty could be set by the GM on the spot or perhaps it’s already listed on the map tile. If the roll succeeds, the mission worked without a problem and they achieve their goal. In the case they failed, things get interesting. Then the GM improvises a scene where the players have to deal with complications.

Of course players and the GM are always free to come up with new ideas. The GM may introduce new concepts to the game, add some global events and breath some life of its own into the world. Players can pursue their own goals as well, shaping the world in the progress.

You can use this idea as a framework to help you run a sandbox game or put some more work into it to emphasize the boardgame elements. A fully-fledged game using these ideas might have cards with NPCs on it, pregenerated map tiles, rules for scavenging material and resource management in addition to some roleplaying game rules.

I actually think that adding some strategy game elements could be the way to go with my Astronauts RPG. What I am currently envisioning is a campaign focused on exploration of Mars, where the players explore the planet, do research, construct a base etc. using the strategy game framework described above.