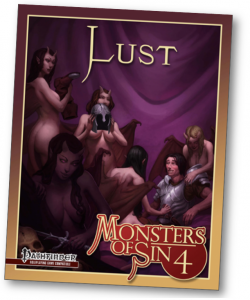 I recently reviewed the first three installments of the Monster of Sin series from Kobold Press, formerly Open Design Games. (I like the change; the friends at Open Design are so tied to their flagship Kobold Quarterly product and their mascot that it makes sense to be called Kobold Press, I for one like the change! But I digress…) This time around we get to my favorite Deadly Sin, Lust.

A long time ago I took some online survey that informed me that (if I believed in such things) I would spend eternity in the second circle of Dante’s Inferno. As much as I enjoyed Dante’s poem, I must admit that sexuality in games is a topic I have always been fascinated about. It is such an integral part of who we are as human beings that just ignoring it in games seems anathema. Of course I realize that may not be the case for everybody that people game for different reasons, and that’s fine.

The author realizes this as well and includes a sidebar on the matter. He discusses the fact that sex is a theme that will be discussed in the book, reminding GMs to be mindful of player’s sensibilities and that having fun is more important that using every detail in the book, kudos for that. I like that they did not shy away from the topic but made sure to accommodate all styles. In all sincerity I did not find anything terribly taboo or controversial in the book.

This supplement for the Pathfinder RPG continues the formula of the previous three books, beautiful full color cover and great black and white interior illustrations, excellent lay out. The book is 11 pages long, 6 of content. It begins with a discussion of the sin of lust and a template, the Lust Slave. It’s a +1 CR template, where the Lust Slave creature receives benefits when in the presence of the creature it lusts after, disadvantages when separated or ignored by the object of desire.  While interesting the template is my least favorite part of the book. However the first creature more than made up for this!

The Inbred Orc suffers the ravages of inbreeding. The resulting mutations can be benefits or hindrances but it changes around what abilities the orc will have. This orc is presented both as a character option with accompanying rules (and while I think the attributes modifiers make it an unlikely choice for players you never know) and a sample character, and CR 2 Inbred Orc Ranger. This was my favorite part of the book; this simple orc fuelled my imagination and in just two pages introduced so many ideas about orc society, with crunch to back up the fluff.

There is a CR 2 fey with a troubling curiosity about gender roles and sex and a CR 11 undead, a broken hearted ghost. Both are evocative and play into the theme of lust exceedingly well, even if the CR spread is a little askew. The Embodiment of Lust is a CR 21 outsider with the ability to play havoc on the emotions of those that gaze upon it. I love the concept and special abilities, but the preponderance of very high Will saves may not be to the liking of every player. The book closes with a discussion of lust in the Midgard setting.

After the Monsters of Sin are done we need a series entitled the Champions of Virtue series about the seven heavenly virtues? I can see it now, alternate abilities for Paladins and Inquisitors, Orders for Cavaliers, Mysteries for Oracles, Domains for Clerics. I would love to see that as a companion to the Monsters of Sin!

The book is $2.99 and available from the Kobold Press web store, and other fine online retailers. There is also a subscription to the 7 books set for $15.99. Like their Advanced Feats and Divine Favor series before, I am very impressed by the Monsters of Sin. The kobolds have done it again