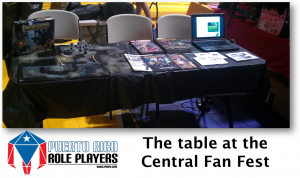 Not too long ago Puerto Rico Role Players once again participated on the Central Fan Fest, a local convention dedicated to Anime, Cosplay, Sci-Fi and (with our presence there) RPGs. This convention holds a special place in my heart because the organizers were the first to give us a space were to share our love for games back in 2010. I can’t believe it’s been two years!

I’ve written about cons, specifically local cons before. One of the things we do in Puerto Rico Role Players is promoting the group. We have periodic activities and cons such as this lets us reach new people who have not heard of us. We also do demos… We try to select games that have a wide appeal, we’ve done Star Wars, D&D, Pathfinder, zombie games, and on every occasion we try to introduce role-playing games to people who know nothing about them, on the recent con I had just such an opportunity. 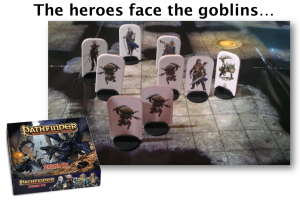 I had set up the materials from the Pathfinder Beginner Box and about mid-morning a group of pre-teen and teens came by the table and were interested in my pitch so they sat down to game. The group of three (11, 13 and 14 years old if I am not mistaken) selected characters and began to play the adventure that comes with the box. At first a fellow member of the group ran the last character (first Sergio Murillo and then Mario Agrait, thank you both!) helping them along with the role-playing concept and about halfway through the game we found a fourth player, somebody with previous experiences with RPGs, who took over the 4th character.

It was incredibly fun! Unlike me who had to learn the whole concept of RPG games pretty much alone, these guys had experienced the concept through console or PC games and some ideas were familiar to them. They were soon making plans, getting into character and facing dangers in the dreaded dungeon. They split the party, almost died, decided it was better to stick together and ultimately one of the characters tried to betray the party members to the BBEG. With one of them down the rest of the party triumphed! It felt like a regular game with player who had been at it for a while. 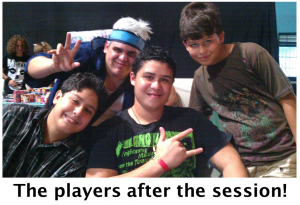 After the game they asked me where they could get the game so I shared information on our FLGS, Metro Comics, and my contact information in case they needed help. Imagine my surprise when I ran into them one week later at said store buying the Beginner Box and excited about role-playing.  I hope I can help them and point them in the right direction so they can continue enjoying the game.

All this rambling brings me to the point of this post. We need to introduce gaming to the younger generation. The common wisdom goes like this, “Younger gamers will not be interested in RPGs because they have consoles and MMOs.” I think that’s just plain wrong! The younger generation is already familiar with elements common to most RPGs tough those other platforms, but when they get to experience tabletop role-playing games they see the different experience it offers, the face to face social aspect, the creative oportunities. Tabletop can co-exist with console, PC and MMO RPGs. We just need to teach the newer generation.

I admire my friend Mario who runs games for teen gamers and integrates them to his regular group. I have a full group and cannot bring in new regular players, regardless of age, but I want to share with others the joy of tabletop role-playing games and hope to continue showing others just what I love so much about it. Especially younger players, because they are the future of the hobby! So I invite you, if you have the time or the inclination, run a game for such a group, at a convention or FLGS. Let’s keep the game alive!

PS – I had another title in mind for this post, “I believe the children are out future…” But I’ve done Whitney Houston references before, and since I think this is an important topic I decided to go with the title above. Just letting you all know how my mind works!